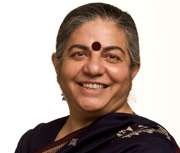 Dr. Vandana Shiva is trained as a Physicist and did her Ph.D. on the subject “Hidden Variables and Non-locality in Quantum Theory” from the University of Western Ontario in Canada. She later shifted to inter-disciplinary research in science, technology and environmental policy, which she carried out at the Indian Institute of Science and the Indian Institute of Management in Bangalore, India

In 1982, she founded an independent institute, the Research Foundation for Science, Technology and Ecology in Dehra Dun dedicated to high quality and independent research to address the most significant ecological and social issues of our times, in close partnership with local communities and social movements. In 1991, she founded Navdanya, a national movement to protect the diversity and integrity of living resources, especially native seed, the promotion of organic farming and fair trade. For last two decades Navdanya has worked with local communities and organizations serving more than 5,00,000 men and women farmers. Navdanya’s efforts have resulted in conservation of more than 3000 rice varieties from all over the country and have established 60seed banks in 16 states across the country. In 2004 she started Bija Vidyapeeth, an international college for sustainable living in Doon Valley in collaboration with Schumacher College, U.K.

Dr. Shiva combines the sharp intellectual enquiry with courageous activism. She is equally at ease working with peasants in rural India and teaching in Universities worldwide.

Time Magazine identified Dr. Shiva as an environmental “hero” in 2003 and Asia Week has called her one of the five most powerful communicators of Asia.

Forbes magazine in November 2010 has identified Dr. Vandana Shiva as one of the top Seven most Powerful Women on the Globe

Dr. Shiva has contributed in fundamental ways to changing the practice and paradigms of agriculture and food. Her books, “The Violence of Green Revolution” and “Monocultures of the Mind” have become basic challenges to the dominant paradigm of non-sustainable, reductionist Green Revolution Agriculture. Through her books Biopiracy, Stolen Harvest, Water Wars, Dr. Shiva has made visible the social, economic and ecological costs of corporate led globalisation. Dr. Shiva chairs the Commission on the Future of Food set up by the Region of Tuscany in Italy. She is a Board Member of the International Forum on Globalisation and a member of the Steering Committee of the Indian People’s Campaign against WTO. She also serves on Government of India Committees on Organic Farming.

The area of Intellectual Property Rights (IPRs) and Biodiversity is another area where Dr. Shiva has contributed intellectually and through campaigns. Through her leadership and commitments, Dr. Shiva and her team at the Research Foundation for Science, Technology and Ecology successfully challenged the biopiracy of Neem, Basmati and Wheat. Besides her activism, she has also served on expert groups of government on Biodiversity and IPR legislation.

Biotechnology and Genetic Engineering are another dimension of Dr. Shiva’s campaigning internationally. She has helped movements in Africa, Asia, Latin America, Ireland, Switzerland and Austria with their campaigns against genetic engineering. In 2003, with movements worldwide she launched the global citizens campaign on the WTO GMO dispute between U.S and Europe.

Dr. Shiva’s contributions to gender issues are nationally and internationally recognized. Her book, “Staying Alive” dramatically shifted the perception of Third World women. In 1990 she wrote a report for the FAO on Women and Agriculture entitled, “Most Farmers in India are Women”. She founded the gender unit at the International Centre for Mountain Development (ICIMOD) in Kathmandu and was a founding Board Member of the Women Environment and Development Organization (WEDO).

She serves on Prince Charles’s expert group on Sustainable Agriculture. Dr. Shiva is a member of President Zapatero’s Scientific Committee. She has been invited by the Prime Minister of Bhutan to help Bhutan go 100% organic.

Dr. Shiva’s books include Soil not Oil, Earth Democracy, Water Wars, Patents Myth and Reality, Tomorrow’s Biodiversity, Stolen Harvest, Biopiracy – The Plunder of Nature and Knowledge, Monocultures of the Mind – Biodiversity, Biotechnology and Agriculture, Ecofeminism, The Violence of the Green Revolution, Ecology and the Politics of Survival, Staying Alive.

Among her many awards are the Alternative Nobel Prize (Right Livelihood Award, 1993), Order of the Golden Ark, Global 500 Award of UN and Earth Day International Award. Lennon ONO grant for peace award by Yoko Ono in 2009, Sydney Peace Prize in 2010, Doshi Bridgebuilder Award, Calgary Peace Prize and Thomas Merton Award in the year 2011.

Dr. Vandana Shiva has also worked in a feature film “Harmony” (alongwith other prominent global personalities) produced by Prince of Wales which addresses critical global issues and inputs from Global leaders including The Prince of Wales which gives a new perspective on how the world can globally, locally and personally meet the challenges we are facing today.