Everyone has been experiencing the ill effects of disruptive politics. Thinking of the present situation in terms of a partisan divide doesn’t go far enough–there has been a wholesale loss of trust. Hope for a better future is defeated on a daily basis. Faith in the democratic system is perhaps at an all-time low. This malaise isn’t about issues and parties. It’s about how we view bad events and react to them. Society presses the argument that problems arise “out there,” usually caused by other people, and getting immersed in private emotion is a suitable response.

The cycle of event-response never ends, and it rarely solves anything. But we are all addicted to it. Not only do outside events capture our attention, but also there is the rush of feeling angry or elated, victorious or defeated. The world’s wisdom traditions say very little about politics, but they have much to say about getting entangled in the drama, beginning with the teaching that matters the most: the drama never ends. Once you get enmeshed in external events that trigger strong emotions, you have joined the drama either as participant or spectator. Therefore, reality “out there” is the level of the unending problems life brings our way. By becoming stuck in it, people sacrifice their only path to finding a solution, which is to base their sense of self “in here.” If you don’t want to be affected with malaise, stop ingesting the next dose of poison.

When you lose hope, trust, and faith, nobody did it to you. However much you are tempted to demonize somebody else, everything “out there” is aimed at one and only one thing: keeping the drama going at full boil. How you respond is your responsibility, and this turns out to be the opening that sets you free of the drama. Dramas are built out of plot lines, and when you start to look inward, it becomes clear that every plot line, down to the smallest detail, is self-created.
Instead of talking about how to change the narrative–a common topic now, after so many old plot lines have been disrupted and destroyed–it’s crucial to know where any story comes from. When you were a baby, there was no story. If a baby starts chewing when it’s teething, there is no concept of “shoe” (or baby). There are only sensations associated with the shoe: color, texture, shape, smell, and in this case, taste. In the process of development, babies move from feelings to organized perceptions, then on to language and thoughts. Each step adds a building block to the story of life, and by the time adulthood is reached, everyone’s story has taken on a life of its own.
Which is the whole problem. The tags in your story may be white, male, professional, Republican, which enables you to ease into someone else’s worldview if they share enough of the same tags. 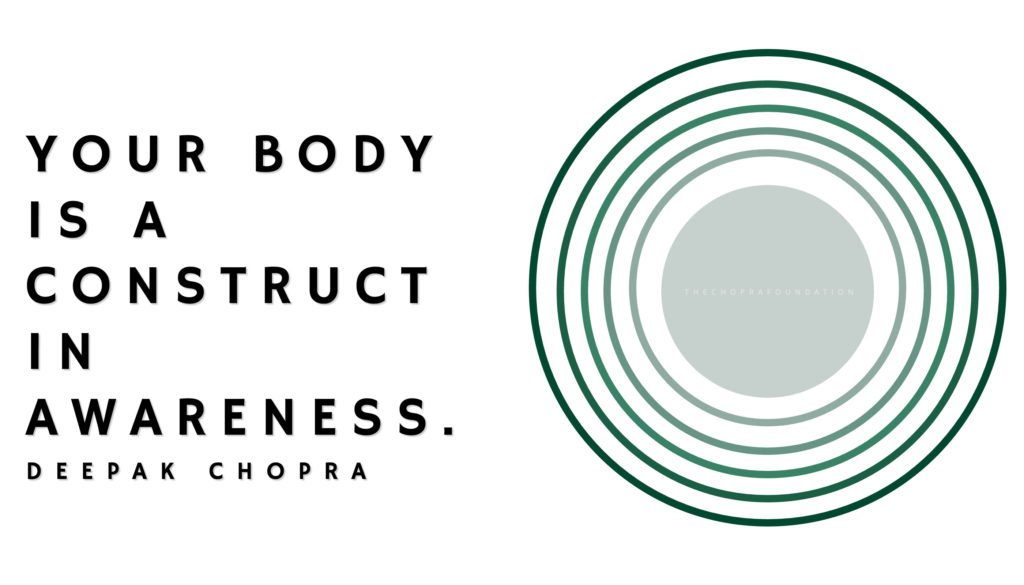 These tags are constructs. Nature doesn’t give birth to Democrats or conservatives, Catholics or Protestants, etc. But by identifying with all the labels that attach to us, we gain a sense of identity–and it’s a false identity, in every case. The story you’ve created has taken on a life of its own because you forgot that you are the creator, the author and not a character.
Babies are not blank slates that get imprinted like hammering a dent into a car fender. They are bundles of experience that is being processed in awareness. How the process turns baby A into Mozart and baby B into Kim Jong-Un remains a total mystery. But one thing is certain: the process occurs in awareness. Expose two children to the same upbringing, and each can turn out to be completely unlike the other. Expose any group of people to the same set of facts, and you will get as many interpretations as there are people.

At this stage of the argument, most of us will agree that all kinds of external influences went into our personal story, and that we interpreted these influences in a very personal way. But go back to the baby chewing a shoe. The experience of chewing the shoe is all the shoe is for the baby. Without a concept of “shoe” to organize the experience, it’s just an activity in awareness. This leads to a startling conclusion that takes time to absorb. Your body is experienced the same way a baby experiences a shoe. You take in a bundle of sensations through the five senses. There is no “body,” much less “my body,” until you construct a concept that organizes the actual reality, which is that your body is only an activity in your awareness.
You can prove this to yourself with a simple thought experiment. If you are experiencing your body and take away how it smells, what’s left? The other four senses. Take away how your body sounds, and what’s left? Three senses. Take all of those away and what’s left? In other words, imagine yourself paralyzed in a hospital bed, blind and deaf, receiving no sensations from your body at all. What remains is only a concept, the notion of “I have a body.” That notion is something to hold on to, which is fine. No one is saying you have to return to the state of a baby chewing on a shoe.
The point instead is to realize that your body is a construct in awareness. If you take away every label and tag that defines you, the same thing will always be left behind: the awareness that builds constructs, modifies and destroys them, gets bored with an old story and rearranges it into a new one. the only stable self is the awareness that participates in this creative process. Therefore, the world’s wisdom traditions teach that there is no “I” except awareness, and what it happens to be doing, which is knowing and experiencing.
How does this cure the current state of malaise? Diving into the drama leads eventually to exhaustion and misery. Staying above the drama is impossible–you may have no interest in politics, but the drama has a thousand other hooks. Wisdom consists in knowing that there is a third option. Take control of the constructs you have been immersed in. Realize that you can do and undo these constructs. This realization brings a sense of excitement and independence of real control and creative living. Isn’t that a lot better than suffering from the malaise?

Congressman Steve Israel is a Distinguished Writer-In-Residence at Long Island University in New York and was a Member of Congress for sixteen years. He served as House Democrats chief political strategist as chairman of the Democratic Congressional Campaign Committee; and President Bill Clinton called him “one of the most thoughtful Members of Congress.” He published a critically acclaimed satire of Washington entitled “The Global War on Morris” in 2015. Israel is a political commentator on CNN. His insights appear regularly in the New York Times, Washington Post and elsewhere.