Anyone who has had the audacity to question mainstream science soon runs afoul, particularly in the blogosphere, of hard-line skeptics. Whether they are simply insistent or outright aggressive, the skeptical viewpoint has long been founded on a simple principle. Reality is what lies before us, in the three-dimensional world “out there” that’s verified by the five senses. If you can see it, feel it, touch, taste, and smell it, the thing in question is real (making provisions for scientific instruments like telescopes and microscopes that extend the naked eye).

No amount of argument shakes the skeptic’s credo, and so it’s refreshing that they are being upended, not only by metaphysics or deeper investigation into consciousness–all of which gets dismissed as woo-woo, but by science itself. With the discovery of so-called dark matter and dark energy, which either obeys none of the laws of nature that apply to ordinary matter and energy or else conforms to those laws in a hidden way, the primacy of the visible universe has shrunk alarmingly. Every solid object in the cosmos, including interstellar dust, is barely the cherry on the top of an ice cream sundae, because only a fraction of 1% of creation is constituted by ordinary matter and energy.
This common-sense objection to the physicalists, as materialists now prefer to be called, doesn’t shake their faith utterly, because it might be possible to redefine matter and energy in such a way that the old model of “if you can see it, it’s real” won’t collapse. But other challenges to physicalism are more radical, which is why skeptics need to follow their credo to the nth degree and apply it to themselves. There is almost universal agreement among physicists that the universe emerged from a pre-created state that is a void, known as the quantum vacuum state. This void offers no empirical data. The world’s most powerful high-speed particle accelerators can barely budge any data from the quantum vacuum state, whose existence is so abstract that one might as well call it totally mathematical, i.e., mental. 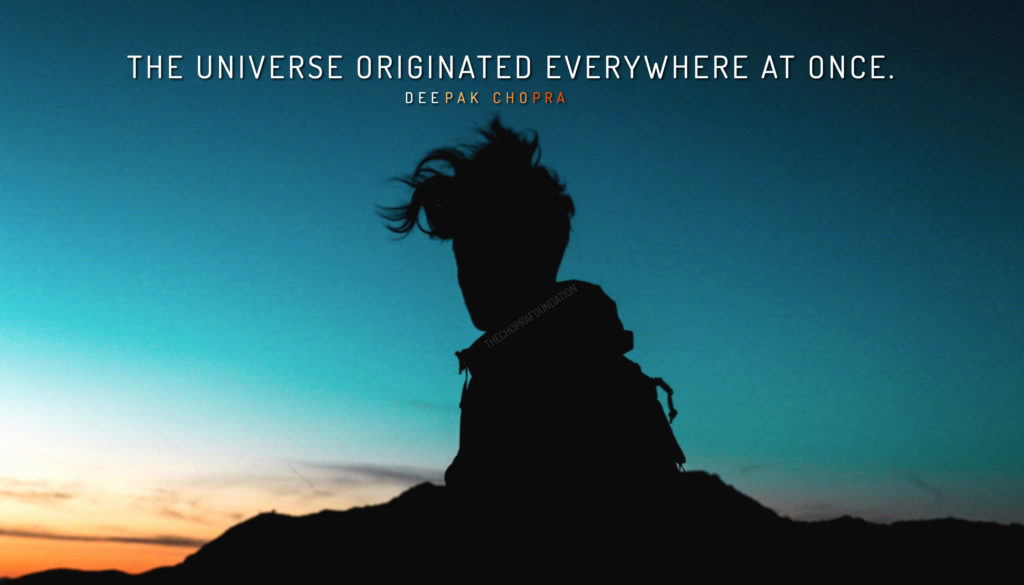 If your foundation of reality is mental, it’s obvious that the five senses have long ago ceased to be reliable (skeptics tend to overlook that among the greatest quantum pioneers a century ago, everyday matter and energy had already been thoroughly dismantled). The notion has long existed, as first evidenced by Heisenberg, that elementary particles have no set qualities; instead, nature delivers measurements tailored to the expectations, experimental setup, and observational bias of human beings. There are no fixed qualities of space, time, matter, and energy that exist “out there” without being extrapolated from human experience.

If you want to be radically skeptical, look with doubt upon a basic fact like the big bang, which we say in human time took place 13.8 billion years ago. With so much agreement on this fact, how could anyone be skeptical? The reason lies deeper than the clock ticking away on the shelf. The big bang has no known origin when you get to the finest level of time and space, known as the Planck scale. At this level, which is measured in trillionths of a second, the emergent universe is about to be born. Its birth wasn’t a bang, for obvious reasons. One, there was no sound, and two, explosions require a place and a time. The Planck scale precedes time and space (granting that “precede” makes no sense without time already existing).

In this pre-reality, if we can call it that, the universe originated everywhere at once, and contemporary theorists speculate over whether the same is true today as well. You can argue, from various viewpoints like eternal inflation, that the existence of matter and energy, whether at the subatomic scale or on the massive scale of galaxies, is a process that never ceases. Besides being timeless, it is also dimensionless. The whole notion of the quantum vacuum state, which is ground zero for reality, can be mathematically tinkered with so that the void has no dimensions, infinite dimensions, or a specific number in between. In a word, reality at its core is inconceivable, and trying to model it with mathematical formulas may serve a certain purpose abstractly, but even diehards like Stephen Hawking concede that current theory may be far removed from reality.

Skeptics should be chewing on the current imperfect and very malleable state of cosmology before they point accusations at anyone else. The defense of common-sense physicalism is not only outmoded by about a hundred years, but it amounts to an article of faith and a superstition, the very things the skeptic movements is dedicated to oppose. In an era of radical skepticism, should it ever arrive, a post-physicalist perspective could be of tremendous benefit to everyone.