When the world looks as turbulent and troubled as it does now, people feel trapped. Instead of feeling secure in prosperous safety zones, even developed countries now feel the pressure of uncontrollable forces, including stateless terrorism, a historical peak in refugees, the threat of epidemic diseases, and fast-encroaching climate change. How many people truly believe that these problems will be solved—or are even solvable? An erosion of hope is underway, and this more than anything must be reversed.

The first step is to realize that we live on a human planet, where each person is trained to view Nature, including human nature, through highly conditioned beliefs and perceptions. The conflicts that develop from us-versus-them thinking are only a thin layer of this collective conditioning. At a deeper level, leaving aside politics, ethnicity, tribalism, and religion, we are participating in a collective hallucination about reality. As illusions go, this one is centuries old, but it isn’t permanent or incurable. We’re talking about a skewed worldview, and worldviews can be changed by their own creators. 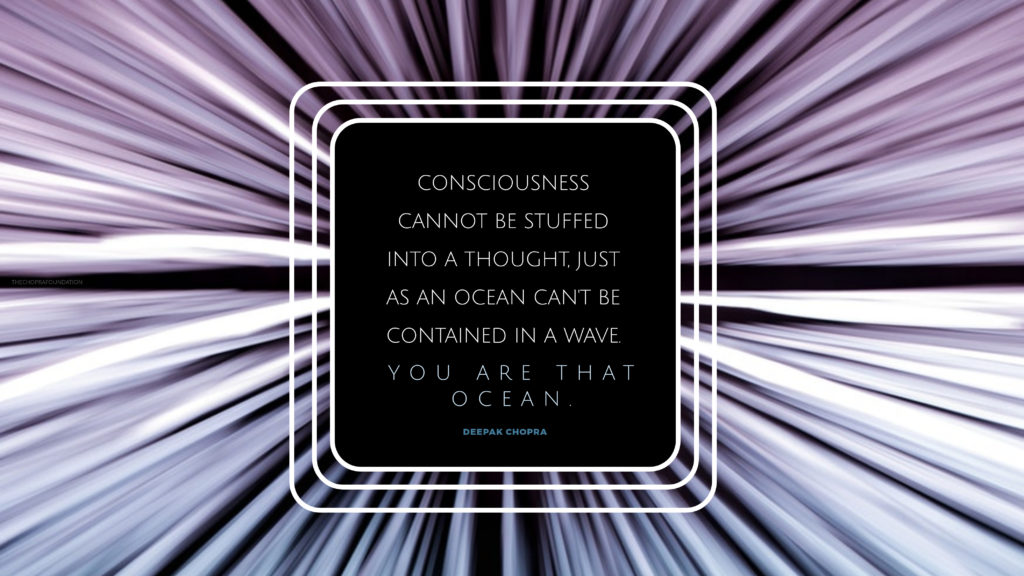 The prevailing worldview that has led to the present crisis arose in the context of a post-religious, secular, scientific age. Since most educated people celebrate the advances visited by this worldview, including every wonder of technology, cures for disease, economic prosperity, and so on, it’s easy to mistake it for reality. But all worldviews are based on a set of accepted beliefs and perceptions.

The fundamental assumptions of the secular scientific worldview include the following:

· The physical world “out there” is the most real thing in existence.

· By comparison, the subjective world “in here” is fickle, unreliable, filled with confusion, and potentially dangerous.

· Natural forces are independent from human life and must be tamed, contained, and brought under human control or else our species won’t survive.

· Being separate from Nature in its cosmic, impersonal, random state, humans are an anomaly. We somehow evolved into conscious beings despite this random, meaningless context. But that fact doesn’t give the universe itself any meaning or purpose.

· Having accepted that we are strange, privileged creatures solely gifted with consciousness, human beings are ultimately victims, struggling in a losing battle against forces of nature that have zero regard for us.

This entire list is part of the constructed hallucination/indoctrination that modern people believe in. In the grip of this hallucination we’ve forgotten how to break the spell we cast on ourselves. It’s a classic example of the prisoner trapped in jail who doesn’t notice that he holds the key in his hand.

In our last post we offered the possibility of liberation by one means: consciousness. (We urge you to read Part I, since it explains the basic principles we elaborate on here.) A consciousness-based worldview would turn each aspect of the current worldview on its head, as follows:

· The physical world “out there” is the projection of human awareness. It is nothing more than the play of consciousness.

· “In here” and “out there” are artificial divisions. Both domains are part of the same reality based in consciousness.

· Our collective hallucination has become extremely complex, giving rise to a scientific model of immense intricacy. But a dream doesn’t become more real just by being more complicated. Science is also an experience in consciousness, and by ignoring this fact we mistake facts and data for reality. In fact, being everything in existence, reality cannot be modeled no matter how sophisticated science becomes.

· Nature isn’t a set of phenomena and forms, ranging from quarks to galaxies. Reality is the field of pure consciousness, and we project on to it whatever we believe in, from exalted spiritual glory to absolute meaninglessness. In response, Nature shows us what we are looking for.

· Having projected this human universe, we feel separate from it. This is the very heart of the hallucination. Whatever consciousness can do, we can do, and consciousness does everything.

These principles sketch out a “one reality’ or non-dual worldview. To someone who accepts the current worldview, such ideas are untenable, even ludicrous. Who could reasonably challenge that there is a world “out there” that is totally real? Science has amassed tons of evidence to support this common-sense view. But it is in the nature of a new worldview to overturn the old one, and the most radical upset concerns the nature of the human mind.

The world’s wisdom traditions don’t equate mind with consciousness, although in the current worldview the two are the same, and both are supposedly produced by neural activity in the brain. But there’s a contrary perspective that can be shown by analogy. Put yourself in a movie theater. Mind consists of all the movies we play out in our lives; consciousness is the movie screen, which every movie needs, yet itself is not part of the movie. Anyone can sit in a movie theater and shift between two styles of perception, either sinking into the movie as if it’s real or breaking the spell and seeing light playing across a screen to give the illusion of reality.

Likewise, it is possible to snap out of the spell of the real-life movies we surrender to every day. This shift in perception leads a person on the path to liberation. Having seen, as the world’s wisdom traditions teach, that birth and death, fear and separation, us versus them, and the division between “in here” and “out there” are human constructs, a new world dawns, simply because every world exists in consciousness, first and foremost. But dropping your belief in the movie is only the first step, and probably the easiest.

At its most radical, non-duality says that reality is inconceivable, which isn’t a comforting thought. Religion says that God too is inconceivable, being omnipotent, omniscient, and omnipresent, but this gets watered down by seeing God in human form. Science suggests that reality is inconceivable, because the entire universe was created out of nothing, a quantum vacuum where every particle and every event in the cosmos exists only in virtual form. But this too got watered down by imagining atoms and molecules as little spinning things that stick together to form bigger spinning things “out there” in the vastness of Nature.

Non-duality cannot be watered down. When it says that reality is inconceivable, this means that your essential nature is inconceivable as well. You are not a collection of tags, labels, qualities, moods, family influences, and a life history—those are plot devices in a movie you call “me.” You are actually the screen of consciousness on which the movie is being projected. When you realize this fact and absorb it fully—not as a concept but as your very nature—there is freedom from the ills of the collective hallucination. The anxiety of separation, war, confusion, strife, the fear of death, tribalism, and the insecurity that comes from staring into the abyss of an apparently meaningless universe begins to dissolve.

Although it can sound daunting to hear that your essential nature is inconceivable, don’t be fooled. To conceive of something is to turn it into a thought. Consciousness, which expresses as all that was, is, and will be, cannot be stuffed into a thought, just as an ocean can’t be contained in a wave. You are that ocean. This means that to know your true nature, you don’t have to figure your way out of the current predicament. When a wave relaxes, it merges unto its true nature as the ocean. Simply begin to relax into your essential nature.

This is the path that unifies humanity by virtue of unifying who we really are instead of accepting only a composite of cultures, which are larger, socially-validated themes. The non-

dual worldview doesn’t eradicate science or culture by any means, but it does put all mental models of reality within a greater context. Technology can continue to advance; science can pursue the intricacies of the brain and their connection to mind. But one thing will be different once and for all. Human beings will know who we really are, having woken up from a very convincing but unreal hallucination.

Deepak Chopra MD, FACP, founder of The Chopra Foundation and co-founder of The Chopra Center for Wellbeing and Jiyo.com, is a world-renowned pioneer in integrative medicine and personal transformation, and is Board Certified in Internal Medicine, Endocrinology and Metabolism.  He is a Fellow of the American College of Physicians, member of the American Association of Clinical Endocrinologists and Clinical Professor at UCSD School of Medicine. Chopra is the author of more than 85 books translated into over 43 languages, including numerous New York Times bestsellers along with You Are the Universe (February 2017, Harmony) co-written with leading physicist, Menas Kafatos. Other recent books include Super Genes co-authored with Rudolph E. Tanzi, Ph.D. and Quantum Healing (Revised and Updated): Exploring the Frontiers of Mind/Body Medicine. www.deepakchopra.com

Anoop Kumar, MD, MM is Board Certified in Emergency Medicine and holds a Master’s degree in Management with a focus in Health Leadership from McGill University. He practices in the Washington, DC metro area, where he also leads meditation gatherings for clinicians. He is the author of the book Michelangelo’s Medicine: How redefining the human body will transform health and healthcare. Anoop enjoys exploring and communicating about the intersection of self-awareness, science, and wellbeing. Visit him at anoopkumar.com and follow @DrAnoopKumar.