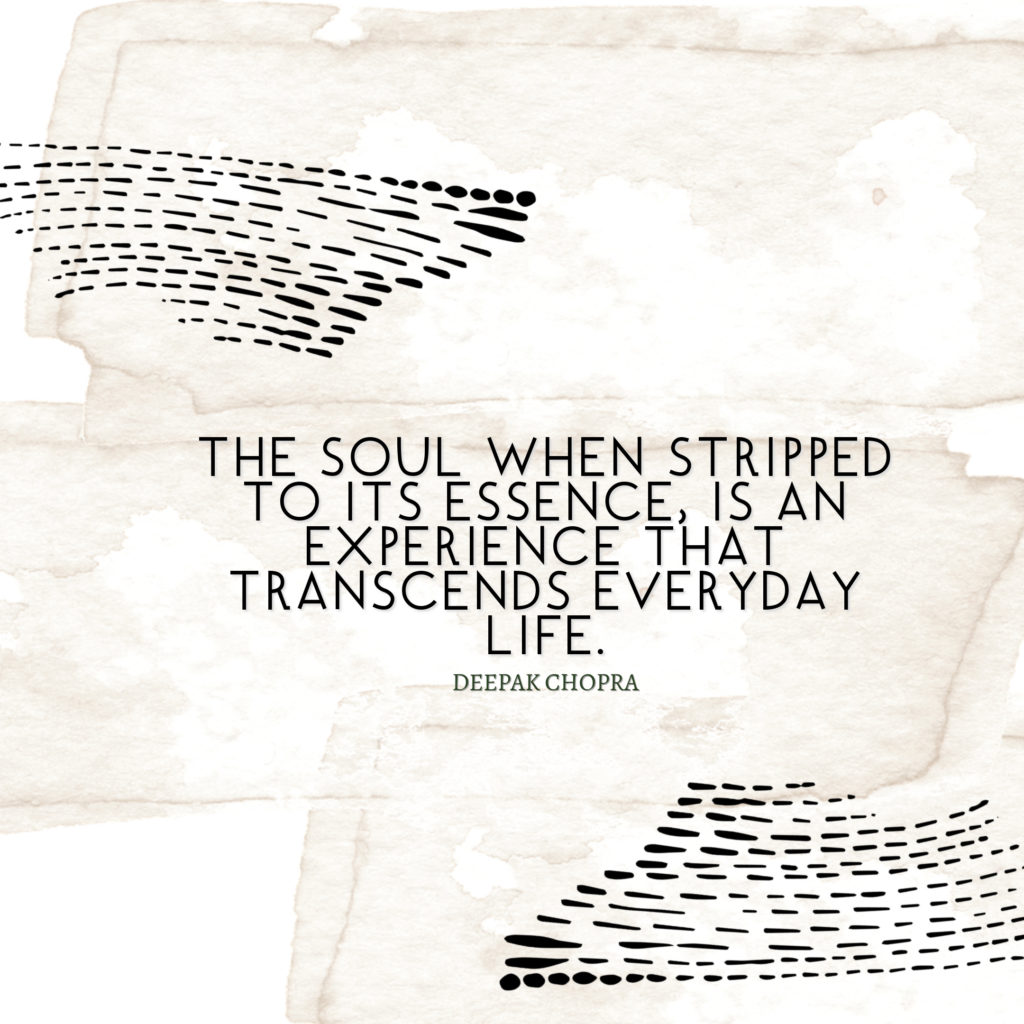 Depending on which polls you consult, more than half of Americans and up to 67% believe that a person’s soul goes to heaven or hell after death. This belief seems unusually strong considering that more and more Americans no longer identify with a fixed religion. “I’m not religious, but I’m spiritual” has become a common sentiment, and yet the idea of the soul continues to hold its place.  One might even say it outstrips God as a matter of belief.

Look at how deeply embedded the word “soul” is in our culture, from soul music to soul searching. Once a word takes hold, so does the concept it represents. To a pure rationalist, there’s no reason to say that the gospels sung in African American churches are more soulful than a Beethoven symphony. When someone searches his soul, the psychological reality is that he is usually just consulting his conscience or weighing issues of right and wrong that came from childhood upbringing.

There is a good possibility in fact, that the soul is a deeply rooted concept rather than a reality–militant atheists would go even further and describe the soul as pure superstition. At the very least, if you no longer abide by religious doctrine, discovering the reality of the soul means that you must move from belief to experience. The soul, when stripped to its essence, is an experience that transcends everyday life; it goes beyond reason and logic; it is validated not by facts in evidence but by direct contact. Lots of things, starting with our emotions, are validated the same way. If you haven’t experienced anger or love, you know these emotions only abstractly and from the outside.

The tricky part, so far as the soul is concerned, is transcendence. Do we actually go beyond daily life and ordinary experience to visit another, higher dimension? Doubts on this score abound, which is why most people try to bring the soul down to earth, beginning with the words “my soul.” To say “I have a soul” brings everything down to a personal level, and yet this is the very thing that deprives the soul of any chance to be real. “I have a bank account” and “I have a job” implies possession, and the soul, not being a thing, cannot be possessed. “I have a family” and “I have a religion” implies identification, helping to strengthen and define who you think you are. Thinking you are your soul can’t work the same way, however, unless you lived at the soul level, if not all the time, at least enough of the time that it feels like you.

Making the shift from belief to reality can never happen by accepting second-hand opinions and mental concepts. These are habits that reinforce themselves without actually getting anywhere. Your belief in the soul probably has little or no effect on your daily life, focused as you are on the demands of the modern secular world.  This makes belief in the soul a cheap commodity, something we can casually hold on to without being forced to test it. It’s safe to say that for millions of people, the testing time won’t arrive until they die, when supposedly you will discover if a soul goes to heaven or hell.

Far better to make the testing time today, or at least begin the journey that will validate the soul or do something else with it.  by “something else” I mean that on the journey of expanding your own awareness, the soul undergoes a transformation. “My” soul exists only when the concept of I” is limited, confined to a span of time between birth and death and enclosed within a physical body destined to age and perish. It is because we identify with this limited “I” that the dilemma of the soul arises. When you change your identification, the soul shrinks in significance.

Rather than standing for the precious divine essence inside you, the soul becomes not much more than a verbal tag. The tag was needed in the mental setup of opposites that runs daily life. Religions codify a special set of opposites: good and evil, God and Satan, Heaven and Hell, etc. All these verbal tags are then set in dramatic motion as a kind of war or spiritual combat for the souls of humans. When someone accepts this special set of religious tags, they stand for something real; by stepping away from them, this reality becomes shaky and eventually dissipates.

Yet it seems that one particular opposite lingers everywhere that religion has reached: mortal and immortal. This is the essence of the spiritual mystery, in that this mortal body contrasts with the immortal soul. In the actual experience of expanded consciousness, the duality of mortal and immortal is meaningless. Existence is whole, complete, undivided, having no before or after, no place to arrive at or leave. The experience of existence at its most basic, when a person confronts the state of pure consciousness, is the experience of waking up.

Waking up resolves most spiritual questions by revealing that they don’t actually have much, if any, meaning. For example, if existence is one and God is one, the two merge, and there is no reason to create a mysterious category for a supreme divine Creator. In the same way, all the attributes we hope to find in the soul, most especially our hope of being immortal, are embedded in existence itself. Once you consciously awaken to this reality, every dilemma in the state of duality, or opposites, ceases to have any meaning.

Belief in the soul, then, is a hopeful state that turns out to be two-edged. Hope keeps a cherished possibility open while at the same time blocking the way forward.  Being stuck in your faith is like being stuck in anything; it’s static. It’s truly said that the spiritual journey consists of eliminating all illusions, because once every illusion is gone, what remains must be real.  In reality consciousness is the source of everything in existence, unfolding in modes of knowing and experience that are modes of consciousness at play. The soul as a human concept is what it is–a tag for experiencing the transcendent. But no tag is as valuable as experiencing the transcendent itself, which is the goal of waking up.