How to Be Timeless Right This Moment

For most people, the two words “timeless” and “eternal” seem roughly the same. They spell the end of clock time, and for many religious believers, Heaven is eternal, a place where time goes on forever. Whatever you think about it, time coming to an end isn’t a pleasant prospect, because the clock stops, so to speak, when we die. But there are problems with all of these concepts, and if we really go deeply into the subject, time is very different from what we casually accept.

Physics has had a lot to say about time thanks to Einstein’s revolutionary concept that time isn’t constant but varies according to the situation at hand. Traveling near the speed of light or drawing near the massive gravitational pull of a black hole will have a drastic impact on how time passes. But 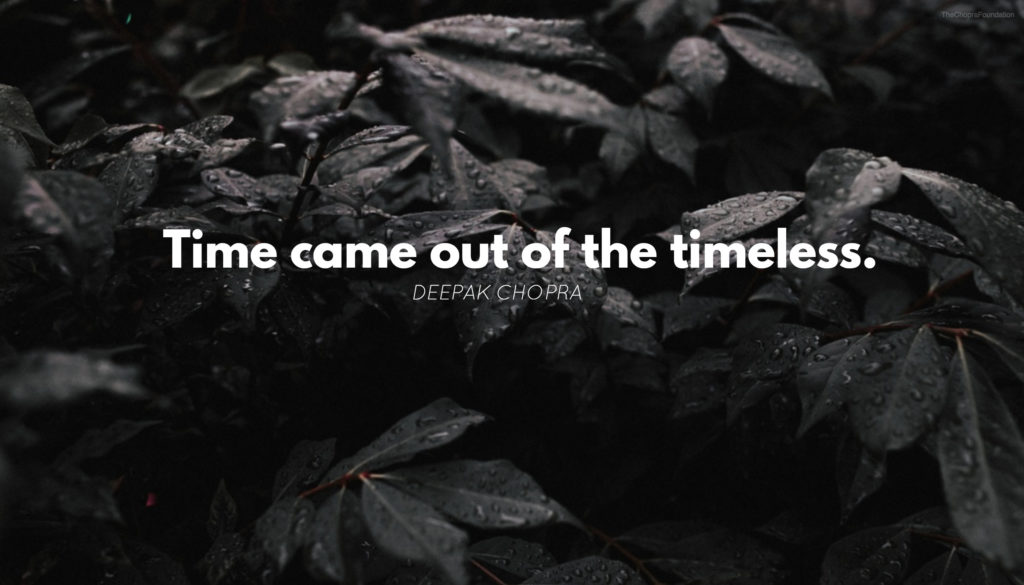 let’s set relativity aside for a moment to consider how time works in human terms, here and now. Each of us normally experiences three states of time: time ticking off the clock when we are awake, time as part of the illusion of having a dream, and the absence of time when we’re asleep but not dreaming. This tells us that time is tied to our state of consciousness.

We take it for granted that one species of time–the one measured by clocks–is real time, but that’s not true. All three relationships with time–waking, dreaming, and sleeping–are knowable only as personal experiences. Time in fact doesn’t exist outside human awareness. There is no absolute clock time “out there” in the universe. Many cosmologists would argue that time, as we know it in waking state, entered the universe only at the big bang. What came before the big bang is probably inconceivable, because “before the big bang” has no meaning if time was born at the instant the cosmos was born. If you go to the finest level of Nature, to the vacuum state from which the quantum field emerged, the qualities of everyday existence, such as sight, sound, taste, touch, and smell, no longer exist, and there is also a vanishing point where three-dimensionality vanishes, along with time itself.

What lies beyond the quantum horizon is purely a matter of mathematical conjecture, yet one thing is certain. The origin of everything real is beyond the reach of time and space. The realm that is the pre-created state of the universe can be modeled mathematically as being multi-dimensional, infinitely dimensional, or non-dimensional. Once the everyday four dimensions vanish, any kind of mathematical explanation is open. So it must be accepted that time came out of the timeless and not just at the big bang. Everything in the physical universe winks in and out of existence at a rapid rate of excitation here and now. The timeless is with us at every second of our lives.

To answer this question, we have to back up a bit. Clock time has no privileged position in reality. There is no reason why it should be elevated above dream time or the absence of time in dreamless sleep. Clock time is just a quality of being awake, like other qualities we know as colors, tastes, smells, etc. Without human beings to experience these qualities, they don’t exist. Photons, the particles of light, have no brightness without our perception of brightness; photons are invisible and colorless. Likewise, time is an artifact of human experience. Outside our perception, we cannot know anything about time. This seems to contradict the cornerstone of science, which holds that “of course” there was a physical universe before human life evolved on Earth, which means that “of course” there was time also, billions of years of time.

Here we come to a fork in the road, because either you accept that time, as registered by the human brain, is real on its own or you argue that, being dependent on the human brain, time is created in consciousness. The second position is by far the stronger one, even though fewer people believe it. In our awareness we constantly convert the timeless into the experience of time–there is no getting around this. Since such a transformation cannot happen “in” time, something else must be going on. To get a handle on this “something else,” let’s look at the present moment, the now, the immediate present.

All experience happens in the now. Even to remember the past or anticipate the future is a present-moment event. Brain cells, which physically process the conversion of the timeless into time, only function in the present. They have no other choice, since the electrical signals and chemical reactions that run brain cells only occur here and now. If the present moment is the only real time we can know in waking state, why is it so elusive? You can use a clock as fine-tuned as an atomic clock to predict when the next second, millisecond, or trillionth of a second will arrive, but that’s not the same as predicting the now. The present moment, as an experience, is totally unpredictable. If it could be predicted, you’d know your next thought in advance, which is impossible.

Moreover, the present moment is elusive, because the instant you register it as either a sensation, image, feeling, or thought, it’s gone. So let’s boil these insights down. The now, the place where we all live, can be described as:

Now, if all these characteristics are being correctly described, it turns out that we have been fooling ourselves to believe that time is a simple matter of tick-tock on the clock. In some mysterious way, each of us occupies a timeless domain, and to produce a four-dimensional world for the purpose of living in it, we dream it forth. That is, we create the world in consciousness first and foremost. There is no given world “out there.”

This seemingly bizarre conclusion lies at the heart of all non-dual philosophies like Platonism, Buddhism, and Vedanta. None of them had access to neuroscience, so they didn’t fall into the trap of claiming that the brain is responsible for creating time, space, and the messages received by the five senses. The brain, after all, is just another object inside the dream, like a table and chairs, a rock, or a distant galaxy. Nor did these non-dual philosophies fall into the trap of saying that the mind creates reality. The mind is a vehicle of experience, and like time and space, it had to have a source beyond mental experience. If we trusted our minds, we’d equate going to sleep with death. In sleep the conscious mind gives up the world of solid physical objects and clock time. Yet when we wake up in the morning, there is a return of solid objects and clock time. They were held in waiting, so to speak, by consciousness even during the eight hours a day that the thinking mind is out of commission.

In the end, non-dual philosophies, as the name implies, aim to get us free of the dreamscape we mistake as the real world in order to return us to our source. At our source, in pure awareness, we recognize ourselves not as puppets of time, space, matter, and energy but as creators of reality. The merest second of time originated in us. We fill the now with experience. That’s what it means to take the timeless seriously; it changes our very identity. The categories that we lock into separate compartments are in fact part of one unified phenomenon, the unfoldment of awareness within itself.

I realize what a mouthful those words are, but we must wake up to the fact that reality is simply one thing. Body, mind, and spirit belong to this one thing. The come into being all together, and only our belief system turns them into three different things. There is a huge amount to say once you realize that you exist as the timeless source of creation. But the first step is to know that the timeless is with us, beyond any belief in birth and death, time and decay. Things get born and die in our dreams when we’re sleeping, and yet we don’t mourn them because we know that dreams are an illusion. Discovering that the same is true about our waking dream brings the experience known as enlightenment.