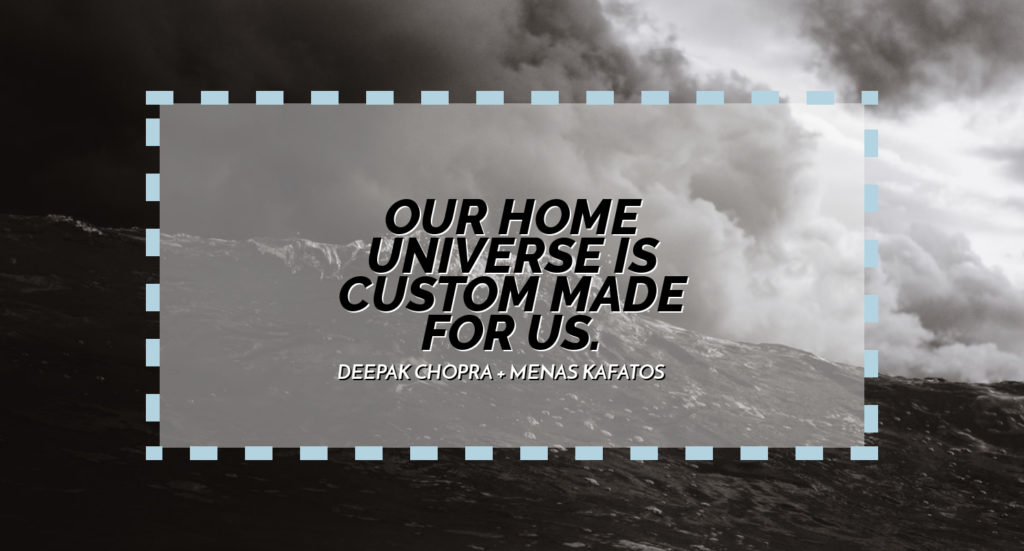 Most people have heard about the fragile start that the universe had. Although the big bang sounds big, it occurred in a space smaller by millions of times than the period at the end of this sentence. The forces of nature had to be exquisitely balanced for the infant universe to work once it expanded to its present enormous size. This exquisite balance is known to physicists as fine tuning. If any one of about twenty constants responsible for the nature of the cosmos had been off by one part in a billion, the infant universe could have collapsed in on itself or flown apart so fast that atoms would never emerge from the primal quantum soup surrounding the beginning of the universe.

A constant is an unvarying number like C, the speed of light. Constants aren’t allowed to be wobbly. The speed of light can’t be unpredictable, changing in the Andromeda nebula (the next-door galaxy to our own Milky Way), from what it is here on Earth. Nor can it change from Monday to Tuesday. Whether you speak of the universe 13.8 billion years ago or today, C hasn’t changed, nor have the other constants that regulate all the matter and energy in the cosmos.

But then a funny thing was observed. Certain large ratios of numbers coming from widely different fields seem to unexpectedly be the same. An example would be the ratio of the electromagnetic force to gravitational force being very similar to the ratio of the radius of the universe to the size of an elementary particle. For no logical reason, both ratios are about 1 followed by 40 zeroes.

Why would this be the case?

Dubbed the large number hypothesis by the pioneering English physicist Paul Dirac, this similarity, he argued, could be far from a numerical coincidence. Some have argued that such coincidences point to the unique characteristics of the universe we live in, namely the ability to develop life and intelligence. If a Swiss watch is missing even one tiny moving part, it can’t tell time. Apparently the same holds true on a cosmic scale. If one constant is off by even a fraction, time couldn’t exist and the universe as we know it today would not be. Since everything is inter-related, the same breakdown would make space, matter, and energy impossible, or at the very least would alter them in ways we can’t imagine.

Our brains, being the product of the same constants that regulate the atom, are also fine-tuned. We think using a physical organ that operates from quantum to cerebrum in a chain of processes that depend on everything being meshed with everything else. If potassium and sodium ions had a different electric charge, for instance, neurons wouldn’t work because they would lack the proper chemistry.

The fact that there is a fixed ratio between a given constant and the diameter of the universe raises an obvious question. In an expanding universe, do constants remain the same, or do they expand and shrink like a rubber band to fit what the universe is doing? The latter would be a remarkable state of affairs; it could challenge the way we go about doing science and how we gather knowledge about the nature of the universe. For at least six decades it was gospel that “constants” cannot change (hence their name). But recent findings, as outlined in last week’s post, has thrown this certainty into doubt. There is evidence that when light travels to Earth from some 12 billion light years away, nearly at the edge of the cosmos, it changed by a tiny fraction.

This could be the biggest breakthrough in modern science, small as the variation is thought to be. We are talking about a few parts in several million. But fine-tuning is much more precise. If you tote up how perfectly all the constants have to be, they form a tight matrix, so tight in fact that any wiggle is impossible. The whole house of cards might crash down, leaving us with no universe. Most physicists would agree in principle with that statement. The grand prize will go to the physicist who can prove it in reality.

If the matrix of constants equals the structure of the universe as we know it, then the large number hypothesis doesn’t point to a mathematical curiosity–it’s the key to life on Earth and the evolution of human beings. There is already a theory of creation based on the anthropic principle, as it is known. The weak version of this theory holds that the universe is only knowable through the human brain, and therefore we will inevitably see creation as leading with perfect design to us here on Earth. An alien on some distant planet light years away, if it possessed a totally different brain, would see a universe based on its nervous system, with a creation story that leads with perfect inevitability to its emergence. In both cases, we would have perfect design.

The strong version of the anthropic principle goes beyond having a human (anthropic) viewpoint. It holds that the universe must be geared to life on Earth and the evolution of Homo sapiens because otherwise, we wouldn’t exist. Fine-tuning is for our benefit. Are there other universes that followed a different trajectory? This is possible mathematically, but we will never experience them, because our home universe is custom made for us.

Homo sapiens inhabits a human universe, which is what our book, You Are the Universe, contends. But the new findings that suggest a reality where the constants are changeable opens up a wider, stranger possibility. The human universe may be evolving to suit our own fluid situation. Homo sapiens acquired a modern human brain around 30,000 years ago. But life back then bore no resemblance to life today. Stone Age humans had the brains to build a nuclear reactor or the Hubble telescope, but they needed a more evolved technological setting to bring such achievements into reality.

It would be startling if our species also needed a different universe for each phase of our evolution. This possibility would make us co-creators of the cosmos. Perhaps we must be co-creators of the cosmos. The existence of fluid constants breaks all the rules, but there has to be a central headquarters that keeps reality intact no matter how different things change. A car remains a car even if you redesign the engine. What makes a car a car? It is a concept that engineers and designers turn into a physical object.

In the same way, our universe may be a concept we maintain in its essential nature, but which can be altered creatively in all kinds of ways, the way a Formula One race car is the creative modification of a Model T Ford. If so, then every model of the universe is altered, not by manipulating the physical parts, but by creating new concepts of what belongs to a universe according to collective humanity. We know that this sounds like a wild surmise, but there are leading physicists, following the lead of most of the founders of quantum mechanics, who already believe that we inhabit a conscious universe. It isn’t much of a step to realize that the evidence of consciousness exists because as conscious beings, we insist that reality reflect our state of mind. The human universe has further horizons than anyone ever expected, beyond perhaps what we used to consider as a purely physical universe.

Menas C. Kafatos is the Fletcher Jones Endowed Professor of Computational Physics at Chapman University. He is a quantum physicist, cosmologist, and climate change researcher and works extensively on consciousness. He holds seminars and workshops for individuals, groups and corporations on the natural laws that apply everywhere and are the foundations of the universe, for well-being and success. His doctoral thesis advisor was the renowned M.I.T. professor Philip Morrison who studied under J. Robert Oppenheimer. He has authored 325 articles, is author or editor of 19 books, including The Conscious Universe (Springer), Looking In, Seeing Out (Theosophical Publishing House), and is co-author with Deepak Chopra of You are the Universe (Harmony). You can learn more at http://www.menaskafatos.com