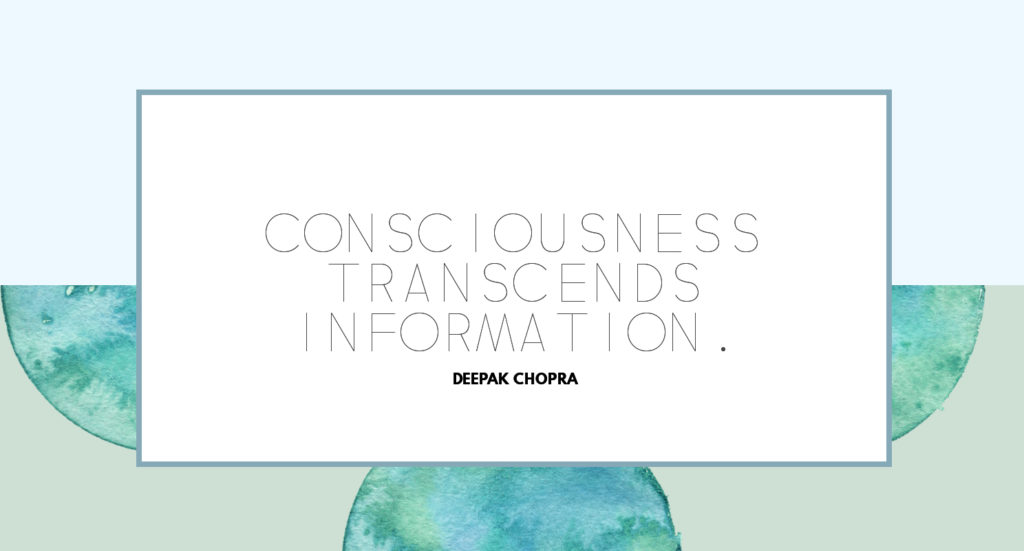 One of the mysteries about our bodies is how they manage to change and yet remain the same.  DNA is routinely called the blueprint of life, yet no other blueprint actually builds the house or skyscraper it models. Once DNA builds a body, the body grows and disintegrates at the same time. This is apparent from the skin and stomach lining, which rapidly form new cells as old ones die. But every cell has a given lifespan and willingly dies, so to speak, when it’s time is up.

How did the body develop this ability to be born and die at the same time, to balance creation and destruction? If we dive to the molecular level, the mystery only deepens. Cells need food, air, and water, and the molecules of each are in constant transport, passing through the cell wall and out again. In addition, the messages that the brain sends to every cell in the body course through the bloodstream with precise messaging that doesn’t get confused–in effect, the bloodstream is an information superhighway in which there are no traffic accidents even though the cars have no drivers.

To date, the best way to understand what’s going on is through genetics, and now the whole field of genetics has entered the information age. As summarized in a recent TED talk by biologist Dean Gibson provocatively titled “How to Build Synthetic DNA and Send It Across the Internet ” there are now machines that biologically print DNA once they are fed instructions in the form of data easily transmitted on the Web. This conversion of information into actual DNA builds upon previous technology that enables bits of stored genetic material (the basic four-letter alphabet of ACGT) to be combined in any conceivable way.

Gibson’s lab has pioneered sending information and turning it into genetic material, which in 2013 allowed them to take the code for an alarming new strain of bird flu in China and in a matter of hours turn it into a viable vaccine to fight the disease, a process that normally takes up to six months. The promise of similar applications is set to revolutionize how new drugs are made.

But none of this would be possible without reducing biology to data, making information the basis of life. If you take this new viewpoint and apply it to your own body, then the mystery of simultaneous creation and destruction, birth and death, change and nonchange is suddenly dematerialized.  It’s no longer the physical “stuff” that holds the body together but the endless processing of information. It is an axiom in information science that information cannot be created or destroyed, because the very nature of information is the rearrangement of zeros and ones, which are indestructible in Nature if we transform them into positive and negative electrical charges. (This is what happens in a computer).

If the mystery of creation and destruction is reduced to the shuffling of information, it is entirely possible to have codes that build and codes that destroy. What fascinates me is that all of us are stuck with old, useless, or self-defeating codes. We normally call these codes of information by other names that everyone knows: habits, beliefs, conditioning, mindsets, and so on. We aren’t used to thinking that we are trapped in old information when we find it hard to quit smoking or lose weight, or when someone close to us stubbornly sticks to a mindset that is clearly toxic for their own well-being.

Yet a belief or habit shares the same foundation as any other type of information that can be coded. When somebody has a knee-jerk response, the brain must send signals that correspond to that response, and such signals are information. This sounds abstract, but everyone knows what it feels like to do or say something mechanically, sometimes without even seeing what you’re doing. Hence the repetitive action of eating a whole bag of chips without noticing it or entering into the same marital argument without budging for years at a time.

How do we break out of old information that has trapped us? The clue is this: information doesn’t create itself. The shuffling of genetic information happens, according to standard genetic theory, by accident as random mutations are passed on from parents to offspring.  And there are automatic centers of information in our cells for manufacturing enzymes and proteins–a great deal of information seems to work automatically. Yet this is not sufficient for explaining the constant creation of new coding, which in common parlance we call thinking, feeling, speaking, and doing. The condition of being a living human being can be reduced to consciously coding the things you do every day, every choice and decision.

Whatever you consciously code becomes part of your body and mind, operating as one unified process. Because it is all information, an angry thought exists on the same playing field as the chemical messaging that communicates your anger to every cell. Thus the body’s information superhighway isn’t limited to the bloodstream; it courses through every cell. In and of itself information isn’t alive; it doesn’t think’ it has no mind. Yet nothing exists outside information in one form or another.

There has to be an agency that infuses life and mind into information. This is self-evident. I can digitize Hamlet’s “to be or not to be,” send it over the internet, and have it received by a computer at the other end. But I didn’t actually send words or a speech, much less a speech that has a history and deep meaning. All of those things require an interpreter, and interpretation is a mental act. What causes so much human suffering is interpretation that is negative, self-defeating, mechanical, hidebound, fearful, hostile, and unconscious.

The visionary poet William Blake referred to these as “Mind-forg’d manacles,” the constraints created by the mind to limit the mind. Therefore, the way out of suffering is to break those mind-forg’d manacles, which can only be done by the mind. It’s a self-contradiction to live as both jailer and prisoner, but all of us are caught in that contradiction.  We forged mental restraints and began to live by them as if they were imposed by a higher power.

As a species Homo sapiens has arrived at this astonishing moment when we can assemble and disassemble the codes of life, and yet we’ve been doing the same thing in everyday life for eons, at the level of information. It’s time to wake up and realize that this creative power exists to make us free of the stale, outworn, self-defeating, and painful information that we’re stuck with. Consciousness transcends information, and only consciousness can reshape it into higher and better uses.