Will the “Real” Reality Please Stand Up? 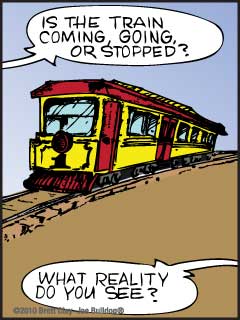 In the pursuit of knowledge about the universe, recent discoveries have pushed earlier than the Big Bang, bringing physics to the point when the early universe was doubling in size every hundredth of a trillionth of a trillionth of a trillionth of a second.  Such fine-scale measurement is awe-inspiring. The technicalities of how a Cold Little Swoosh preceded the Hot Big Bang was lucidly presented in a New York Times article by the noted cosmologist Max Tegmark. He explained for us laymen why physicists are so excited about the discovery of gravitational waves that originated so early in cosmological time, another victory for the predictive powers of quantum field theory.

One is left with the impression that science has now delved much deeper into reality, getting closer to the origins of the universe and therefore our own origins.  However, there’s an analogy that seems relevant here. If you wanted to know the reality of music, would you study a radio as it broadcasts a Mozart symphony, taking it apart and delving into the atomic and subatomic structure of its transistors, or would you study music as a creation of the human mind?

The answer seems obvious, and yet by dismantling the cosmos down to trillionths of a second, physics is basically dismantling a mechanism, like a radio.  This leaves aside the unassailable fact that like music, our entire knowledge of the universe arrives through subjective experience.  We are immersed in reality, not detached from it. The exciting discoveries of cosmology keep advancing along an objective track when it’s well known in quantum physics that objectivity has definite limits. Whatever cosmology is discovering, it may very well not be reality itself.

So how do we know what’s real?  One way is to trust the evidence of the five senses, which deliver a tangible world of sights and sounds. But the five senses indicate that the sun rises in the East and sets in the West, which is an illusion.  Many other illusions exist, enough to make reliance on the five senses quite shaky. Giving them a grade, the five senses get no more than a C for explaining the physical world, but they deserve a solid B for telling us about our inner world, since we sense pain, pleasure, moods, likes and dislikes, etc. as extensions of the five senses. Remembering the hot touch of a stove is the recapture of a sensory event, for example.

To untangle what is illusory from what is factual, a second way to explore reality is available, using the rational mind. Reason gave rise to science, with its data, measurements, explanatory models, scientific machinery, etc. It deserves an A for measuring the physical world, which is good enough to tempt many people into believing that an ultimate way of knowing reality has been found. But reason gets a C when it comes to the inner world, because the rational mind doesn’t even know where an idea comes from, much less the source of creativity, insight, love, beauty, imagination, and many other aspects of mind. Consciousness cannot be explained objectively, despite the hopes and claims of neuroscience. The brain functions like a radio, delivering the music of the mind, as it were. As you dissect it, you can delve very deeply into the brain’s physical structure.  However, just as the reality of music eludes anyone who tries to find it inside a radio, the nature of mind will elude anyone who tries to find it inside the brain.

To know what is “really” real requires going beyond the five senses and the evidence of reason. The world’s wisdom traditions proclaim that reality is known only by examining experience, first and foremost, which entails looking directly at consciousness.  This method is a radical departure from anything most people have ever experienced. Once you look at experience directly, however, some startling conclusions emerge:

– The universe reflects our human perspective.

– All so-called objective measures depend upon the human nervous system, which has the limitation of operating in a linear, cause-and-effect way that confines us in spacetime.

– The source of the universe is beyond space and time; therefore it is inconceivable using thought processes and models.

– Being inconceivable, the source of reality makes reality itself inconceivable. All we think we know is part of a feedback loop that begins and ends with the brain.

– Mathematics may seem like a reliable, objective language for explaining Nature, but it too has a mysterious source and is ultimately an experience, like everything else.

These conclusions tend to baffle and anger everyday working scientists, understandably, because words like “existence” and “consciousness” smack of metaphysics. Moreover, when you propose that reason has its limits, scientists feel that you are attacking their methods and science itself. But none of these assumptions about attacking science is really valid.  Devising a third way to know what’s real came about because just as the five senses cannot tell you that the Earth moves around the sun, reason cannot tell you why your inner world gives life its meaning and purpose. To say that a random universe gave rise to purpose and meaning through the accidental bump of particles in the night is just as tortuous as claiming that the same random activity enabled matter to learn to think.

The third way of knowing reality promises to answer the following deep mysteries, among others:

– Where did mind originate, or is it innate in Nature?

– Why is the universe so fine-tuned that the jiggle of a single constant would have made the cosmos as we know it impossible?

– Is the force of evolution mindless or intelligent?

– Is the universe a conscious entity?

– Is creativity innate in Nature?

– Do we ultimately live in a human universe?

Only a third way of examining reality makes these questions answerable, or even make it valid to ask them. From a Western perspective, it’s impossible to grade this third way of knowing, because we are so convinced of the superiority of rationality.  Judging itself, the wisdom tradition of India, especially Vedanta, gives itself an A for knowing reality, both inner and outer.  There is no need to give two grades, because Vedanta views reality as a wholeness, not divided into inner and outer domains as if they are separate kingdoms.  I’m not advocating that science turn spiritual. It’s unfortunate, but the argument between science and religion has muddied the waters, hiding the fact that the world’s wisdom traditions are not primarily about God but about knowing reality.  Once you see this, then consciousness – the vehicle for all knowledge – becomes a suitable study for both sides of the debate.

Deepak Chopra, MD is the author of eighty books with twenty-three New York Times bestsellers including Super Brain. Join the weightlessproject.org to eradicate obesity and malnutrition. For more interesting articles visit The Universe Within.  Join me at the 5th International Sages and Scientists Symposium.