A Science of Miracles—No Longer Optional? 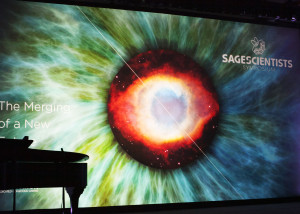 In its ambition to explain every aspect of the natural world, modern science has sidestepped very few problems. Some mysteries are so difficult that they defy the scientific method. It’s hard to conceive of experiments that will tell us what happened before time and space emerged, for example. But two mysteries have been consistently sidestepped for decades out of prejudice. One is the nature of consciousness, the other the reality of phenomena loosely categorized as mystical or supernatural.

However, now that there is a burgeoning science of consciousness, fermenting with much theorizing, arguments, and controversies, it may be necessary to solve all kinds of fringe phenomena, in particular miracles, that have long been considered the province of superstition, credulity, and outright fraud. (This is the hardened position of the vocal skeptics’ camp, but their impact on the practice of science is too minimal to deal with here.)

If you look upon the physical world as a given—what you see is what you get—governed by fixed mathematical laws of nature, the whole domain of wonders and miracles poses no problems. Levitation, bilocation, psychic healing, clairvoyance, near-death experiences, and all the miracles related in the Bible can be dismissed out of hand.  Accepting the physical world “as it is” constitutes naïve realism, which all of us depend upon in our everyday lives. As I’ve pointed out in many previous posts, consistently co-authored with a physicist, geneticist, biologist, cosmologist, or philosopher, naïve realism hasn’t been scientifically tenable for at least a century, ever since the quantum era began.

If we can’t accept the physical world as it is, a level playing field can be posited that includes both the natural and supernatural. The two categories are no longer divided from each other by an impenetrable wall. There are several completely cogent reasons for making such a statement.

The last point needs expanding. If you insist upon being a staunch physicalist, someone who refuses to accept any explanation outside materialism, the brain must be the seat of mind, and the world we perceive must be registered faithfully by the brain.  But there’s no doubt that the brain is fallible. Its mechanisms are easily fooled, by optical illusions, for example. Its fixed neural pathways constantly distort even basic perceptions, as when a person suffering from anorexia looks at her starved and wasted body but sees it as “too fat.”

Leaving aside its fallibility, the human brain processes only a fraction of the billions of bits of sensory data bombarding it every day. Through a process of filtering and reduction, it creates an image of the world that is acceptable for everyday navigation, nothing more. It’s been rightly said that the “real world” is actually a reflected image of how the brain works.  It’s an abstraction built up from mechanical manipulation at the neural level.

To simplify, the real world is like a fenced-in corral that includes only what is acceptable and permissible while shutting out what isn’t. Acceptable and permissible are personal terms—we all know people who are blind to aspects of their lives that are glaringly obvious to others. But these are also social and cultural terms. The brain can shut out what society refuses to see. Sometimes this refusal runs deep into the unconscious. The historical denigration of women and blacks, for example, was created by a complex mélange of beliefs, attitudes, perceptions, received opinions, and willful blindness. All of these ingredients changed the brains of the people who participated in them, including the victims.

A science of consciousness must reach beyond the conventions of acceptable and permissible reality that are brain-based. Physicalists find this impossible to do except in a limited way. They insist that the brain must be delivering reality because for them there’s no other alternative. Thus the brain is given a privileged position. Rocks, trees, clouds, hydrogen atoms, and quarks aren’t conscious, but even as it sits in the middle of the scene, with no qualities to distinguish its “thingness” from the “thingness” around it, we are supposed to view the brain as totally unique.  This is pure animism, the belief that spirits live inside material objects, verging close to religiosity, turning the brain into a three-pound god.

By abandoning physicalism, we wouldn’t be returning to an age of superstition (the favorite straw man of the skeptical camp). We would be expanding the fence, allowing in more of reality.  Until there is an understanding of how the mind interfaces with reality, no viable explanation exists for any experience, much less the mystical.

All I’ve done in this post is to propose a level playing field for all experiences, and that’s only a start, obviously. Saying that miracles aren’t totally excluded isn’t the same as proving that they exist, or even might exist. Having opened the door, we’ll see if miracles can walk through it, which is the topic of the next post.  It was Einstein, not a shaman, yogi, New Age devotee, or charlatan, who famously said, “There are only two ways to live your life. One is as though nothing is a miracle. The other is as though everything is a miracle.”