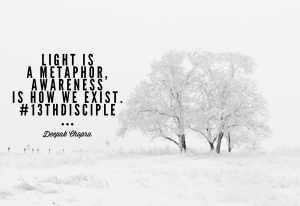 Two views of the universe have been contending with each other to explain why human beings exist. The first view holds that human beings are not special in any way. We evolved through random events that have accumulated over time, taking 13.7 billion years since the big Bang to arrive at the most complex structure in creation, the human brain. This view, long established in physics and biology, constructs evolution in the absence of mind. Matter came first, and mind emerged very late in the game.

The contending view, held by every wisdom tradition, holds that mind came first. The universe is a field of consciousness, which made it inevitable that conscious creatures would evolve over time. Using our self-awareness, humans recognize order, harmony, beauty, truth, love, balance, equanimity, creativity, and the other qualities essential to consciousness. Over the course of our evolution as a species, we have come to embody these qualities. Therefore, the link between humanity and the universe is intimate, to the extent that the only creation we experience is the human cosmos.

Despite science’s enormous prestige, these two views exist on level playing field. The evidence for both is solid. In the previous two posts of this series, we took a single example, synchronicity, and showed how meaningful coincidences can be used to arrive at the same principle of non-locality strongly validated by quantum physics. Working from the other worldview, the eminent British physicist Sir Roger Penrose has theorized that mathematics, the essential language of science, is imbued by a Platonic value like harmony and symmetry—these attributes give mathematics its internal beauty, recognized by every great mathematician and yet inexplicable if you attempt to break this harmony down into reductionist bits of information.

In both cases, a meaningful trait in the makeup of the human mind becomes a basic trait of nature. Synchronicity as a subjective experience and mathematical symmetry as an objective discovery indicate that an underlying wholeness exists in Nature. Why, then, is there any disagreement about the compatibility of the subjective and objective approaches? The most obvious answer is habit and tradition. The scientific viewpoint has been centered on materialism, Darwinian evolution, randomness, and the exclusion of subjectivity for a long time.

This steady focus tells most scientists that they must be right, but in fact it only shows that a model of reality can continue and persist. Outside the laboratory, human experience is measured in millennia, not centuries, and it is reliable. The most reliable aspects are as follows:

These seven points are unarguable. Human beings didn’t invent or imagine them. They arise from simple logic, and they pertain to any worldview, including the religious and mystical. Attributing creation to God or to the Big Bang is logically consistent within its own framework and logically flawed outside that framework.

A model of DNA, for example, explains the structure of living cells, but it says nothing about where life came from. An origins story about life is just that, a story. Similarly, a brain scan can tell you about the firing of neurons in specific areas of the brain, such as the visual cortex. But it says nothing about how the total darkness inside the brain produces the sensation of light and color.

When physics declares, as it does regularly, that a Theory of Everything is possible and will one day be arrived at, this “everything” is purely material—it accounts for the four basic subatomic forces in Nature. A reasonable definition of “everything” would also have to include human experience—the search for theories, after all, is itself an experience. But the Theory of Everything excludes human experience, and therefore constitutes an extremely limited definition of wholeness.

Wholeness is peculiar in that it’s totally necessary for our existence and yet completely inconceivable. Without the universe being exactly what it is, down to the minutest ingredient, the human brain could not have evolved. Yet the human brain isn’t an adequate instrument for understanding how every element was coordinated, either by chance or by some unseen consciousness, to arrive at where we are in our evolution.

The eminent physicist Henry Stapp was a student of two great quantum pioneers, Wolfgang-Pauli and Werner Heisenberg. Stapp recalls that in private conversation, Heisenberg believed for his mathematical framework to make sense, there needed to be what he called an “Objective-Mind”. Such a mind orchestrates the cosmos, which is how objective observation suggests so strongly that behind the appearance of random events, reality is self-organizing, purposeful, and continuously evolving. By analogy, if Rembrandt were invisible, an outside observer would see his brush dip randomly into a palette of colors, and yet the picture being produced assumes definite form, shape, and meaning.

Stapp himself holds to a view originated by another great predecessor, John von Neumann, that “the state of the universe is an objective compendium of subjective knowings.” In other words, the facts collected by science are at the same time subjectively experienced. The “mind of God” has cropped up in scientific discourse form time to time—Einstein used the phrase—as something more than a metaphor but less than a proven fact. It points to a source of infinite potential from which the universe draws its orderliness and at the same time the human mind is able to recognize such orderliness.

If wholeness is inconceivable and two worldviews compete on equal footing, a question arises. Which viewpoint should people hold to in their daily lives? We will address this thorny question in the next post.