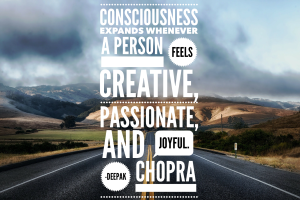 There’s always a sense of crisis in the air generated by whatever bad news is making the headlines. At the moment, the greatest alarm is being stirred by terrorism and the spread of Islamic extremism. Yet at a deeper level, our anxiety centers on something much deeper, the possibility that the human experiment has reached a dead end. A set of enormous problems face us, from climate change and overpopulation to epidemic disease and global water shortages, that test the limits of human nature.

The terrible possibility of moving backward in our evolution as a species seems possible to many observers.  We occupy a unique place in Earth’s evolutionary history, being the only creatures threatened not by natural selection but by our mindset.

Pessimists point to climate change as a stark example. Despite the overwhelming scientific evidence in favor of global warming, no solution is being acted upon quickly enough. The American public has become numbed by issue fatigue. Deniers have political clout, and ordinary citizens feel helpless to the point that many feel doomed. We continually prefer to either ignore the problem or push it away as the consumer lifestyle adds more and more to the underlying problem of greenhouse gas emissions.

Where can hope come from in this scenario, when the creatures gifted by evolution with rationality are acting so irrational that self-destruction looms as a real possibility?

Human history is filled with crises that reason couldn’t solve, including periods of famine and plague, not to mention the persistence of war in every era.  Millions of people have died as a result and well into the scientific age two world wars arose as if to prove that the underside of human nature will forever take its toll.  Science failed to save the tens of millions who perished needlessly in the twentieth century. In fact science multiplied these fatalities thanks to new and improved methods of mechanized death.

How can we reasonably expect that science alone will save us, when it gave us the atomic bomb? The future being planned by so-called rationalists includes robot armies, cyber warfare, genetically modified crops, and remaining on a perpetual war footing, going back to Pearl Harbor in 1941? Unlike militant atheists and other groups that believe science is always the answer, I don’t buy that reason itself is in jeopardy.

The problem lies in how we use our reason. We aren’t the victims of irrationality. Instead, we are victimized by refusing to use enough of our inner potential. Reason isn’t the savior of the future. That role belongs to wisdom. With all the threats to human survival that we now face, I resort to a hopeful phrase coined by Jonas Salk: the survival of the wisest. Although a great researcher in medicine, Salk had the vision to look beyond materialism. He saw that evolution, as it applies to modern human beings, isn’t Darwinian. We no longer live in a state of nature. Competition is more mental and technological today than physical. The survival of specific gene pools, which is the crux of animal survival and adaptation, is irrelevant for us.

For at least two thousand years, our evolution has shifted to the following:

The progress made through the first two factors has reached a tipping point. Our technology and our challenge to Nature may destroy us. So where is evolution going to go? In an age of information, anyone can access knowledge for incredible destruction or incredible creation. The choice isn’t left to governments, churches, or isolated geniuses. Putting technology in the hands of everyone is progress only if the third factor — our vision of ourselves — evolves at the same time.

Arch materialists miss the whole point of human evolution, which is that it long ago broke out of the prison of physicality. True, modern athletes are stronger, bigger, faster, and more accomplished than those of the past, but this doesn’t affect anyone’s survival the way becoming a bigger, stronger, faster gazelle would.

Taking all factors together, humans evolve through the metabolism of experience. That is, we absorb everything going on in our environment, and in some rather mysterious ways, the next generation knows more and can do more than we can. I am not being mystical here. When Einstein published his General Theory of Relativity, Bertrand Russell famously said that he was one of three people in the world who understood it. Now a bright high school student can grasp Einstein’s principles, if not his mathematics.

The same holds true for today’s 5-year-olds who can navigate through a computer better and faster than many adults of an older generation. We assimilate difficulties, solve them, and move on to a new future as more evolved humans. The evolution of the wisest holds that this cannot be a random process. No one is going to stop the diabolical creativity of weapons research except us. Nature is perfectly willing to let us destroy ourselves through ecological collapse. Are we to be regarded as one of Nature’s most interesting failed experiments? And one of the most short-lived, it might be added.

No one really doubts that science and technology have the capacity to find the means to reverse climate change if the entire world community focused on that single goal. Such a choice would be evolutionary, and it can only be made by rethinking who we are as a species. What will save us is self-awareness, the key to evolution of the wisest. Self-awareness and how it grows will be the subject of a follow-up post.