​How the Universe Solved the Hard Problem

For some inexplicable reason the most common element in every possible experience–consciousness–has kept itself a secret. How the human brain produces consciousness–if it does–is an age-old question, currently traveling under the name of “the hard problem.” Philosopher David Chalmers, who coined the term, says, “There is nothing that we know more intimately than conscious experience, but there is nothing that is harder to explain.” This is especially frustrating because we all depend upon consciousness for everything. If we were unconscious, the world would literally disappear in a puff of smoke. This obvious fact implies something that isn’t so obvious: Maybe consciousness and the world appeared at the same time.

A cosmos devoid of consciousness isn’t conceivable, and yet the reason for this exists completely out of sight. Think of sunlight. Obviously the sun can’t shine unless stars exist. There are few secrets left to discover about how stars form, what they are made of, and how light is produced in the incredibly hot cauldron at the core of a star. The secret lies elsewhere. As sunlight travels 93 million miles to Earth, it penetrates the atmosphere and lands somewhere on the planet. In this case, the only somewhere we’re interested in is our eye. Photons, the packets of energy that carry light, stimulate the retina at the back of the eye, starting a chain of events that leads to the part of the brain known as the visual cortex.

The difference between being blind and bein 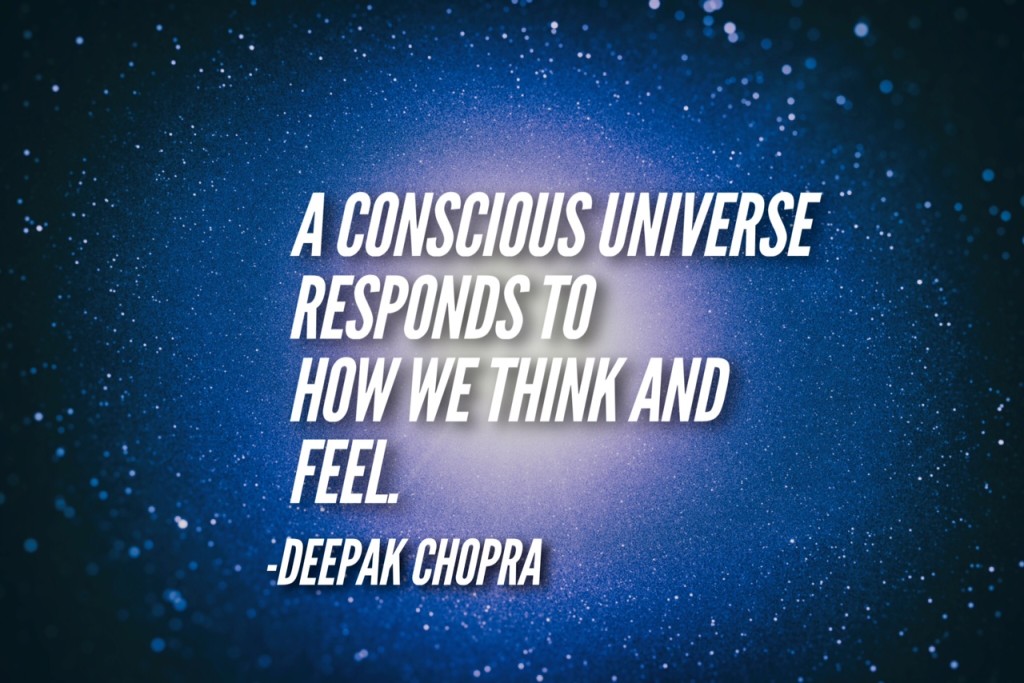 g able to see lies in the mechanics of how the brain processes sunlight—that much is clear. Yet the step in the process that matters the most, converting sunlight into vision, is totally mysterious. No matter what you see in the world—an apple, cloud, mountain, or tree—sunlight bouncing off the object makes it visible, but how? No one knows. The secret of sight is totally immersed in consciousness itself. Without being conscious of light, photons are invisible. Yet it is mistaken to say that light becomes bright in the brain through some physical process, because the brain has no brightness, either. It is as dark as outer space. Because there is no light in the brain, there are no pictures or images, either. When you imagine the face of a loved one, nowhere in the brain does that face exist like a photograph.

At present no one can explain how invisible photons being converted to chemical reactions and faint electrical impulses in the brain create the three-dimensional reality we all take for granted, Brain scans pick up electrical activity, which is why an fMRI contains patches of brightness and color. So something is going on in the brain. But the actual nature of sight is elusive. The same is true of the other four senses as well.

Sir John Eccles, a famous British neurologist and Nobel laureate, declared, “I want you to realize that there exists no color in the natural world, and no sound – nothing of this kind; no textures, no patterns, no beauty, no scent.” What Eccles means is that all the qualities of Nature, from the luxurious scent of a rose to the sting of a wasp and the taste of honey, is produced by human consciousness. Nothing can be left out. The most distant star, billions of light years away, has no reality without our consciousness, because everything that makes a star real—its heat, light, and mass, its position in space and the velocity that carries it away at enormous speed—requires a human observer with a human nervous system. If no one existed to experience heat, light, mass, and so on, nothing could be real as we know it. (At this moment, an estimated 6 billion neutrinos pass undetected through our bodies, but since we have no direct experience of this phenomenon, it doesn’t have the same “realness” as a burning match. Neutrinos exist through inference using mechanical means of detection.)

Because we are conscious participants, we are the creators of reality, and yet we have no idea how we do it—the process is effortless. When we see, light gains its brightness. When

we listen, air vibrations turn into audible sound. This implies that setting consciousness apart as a problem, the so-called hard problem, may be totally wrong. Fish can’t set the ocean apart as an interesting topic, because their total life is involved in water. Therefore, if a fish scientist asked, “What makes water wet?” the question would be invalid. “Wet” is simply how water is. Can we say the same of the cosmos? Perhaps we can’t set consciousness apart as a “problem” because it is innate, like the wetness of water. Only consciousness would have to be universal, not simply a single property.

In a word, consciousness could be the same as existence. This profound knowledge isn’t new. In ancient India the Vedic sages declared Aham Brahmasmi, which can be translated as “I am the universe” or “I am everything.” They arrived at this knowledge by diving deep into their own awareness, where some fundamental discoveries were made. Lost to memory are Einsteins of consciousness whose genius was comparable to the Einstein who revolutionized physics in the twentieth century.

Today we explore reality through science, and there cannot be two realities. If “I am the universe” is true, a complete description of reality cannot take place without consciousness as a primary component. Science must take seriously the hypothesis that this is a participatory universe depending for its very existence on human beings. The reason that this hypothesis seems preposterous to 99% of current scientific thinking is the allure of physical objects. Treating the universe as an object “out there,” which human beings came to inhabit billions of years after the Big Bang seems self-evident. “Of course” there was a cosmos before there was planet Earth and the emergence of life on the planet.

But this ‘of course” is invalidated by the fact that every component of the universe–time, space, matter, and energy–is knowable only through a human nervous system. The “real” reality, the source from which everything in creation emerges, is without dimensions. It has no

time or space. Its constituents precede matter and energy as they exist all around us. It isn’t possible to observe this hidden reality, and yet modern physics theorizes about it all the time, for the simple reason that time, space, matter, and energy must come from somewhere. The word “somewhere” implies a place, which can’t literally exist before space emerged. Therefore, the origin of the cosmos must be, not a place, but a state.

This state can’t be thought about or spoken of, because thinking and language depend on a brain that was created in the context of time, space, matter, and energy. It is only reasonable to call it a transcendent state, and insofar as it has any properties whatever, only two are plausible. The first is existence. It’s hard to believe that our origin is non-existent. The second quality is consciousness. Scientists find it quite easy to believe that the quantum vacuum, the multiverse, or whatever name you give to the transcendent state, isn’t conscious. But to believe this is simply jumping to conclusions.

There is no proof that consciousness isn’t universal, a state permeating all of creation. On the other hand, there are many suggestions that consciousness could be inherent in the cosmos. The first is positive, in the form of our own consciousness, for which no one can find an original cause or set of causes. The second clue is negative, in the impossibility to explaining how physical atoms and molecules somehow learned to think, reason, and become aware. At this moment there’s a growing body of cosmologists developing theories of a completely new universe, one that is living, conscious, and evolving. Such a universe fits no standard model. It’s not the cosmos of quantum physics or the Creation described as the work of almighty God in the Book of Genesis. A conscious universe responds to how we think and feel. It gains its shape, color, sound, and texture from us. Therefore, we feel the best name for it is the human universe. Its existence isn’t a pet theory. The human universe, if it exists, is the real universe, the only one we have.

The solution to “the hard problem” is to realize that the problem was an arbitrary creation, one that seemed logical at the time but become null and void when our perspective shifts.