The universe and the human brain have something important in common. The inner workings of both are invisible. At this moment you have no perception of what’s happening in your brain; neural activity is unknown to the mind of the person to whom the neurons belong without the invention of brain scans to reveal that activity, and then only crudely. Imagine, being a master of a house and not knowing or seeing what is inside the house. 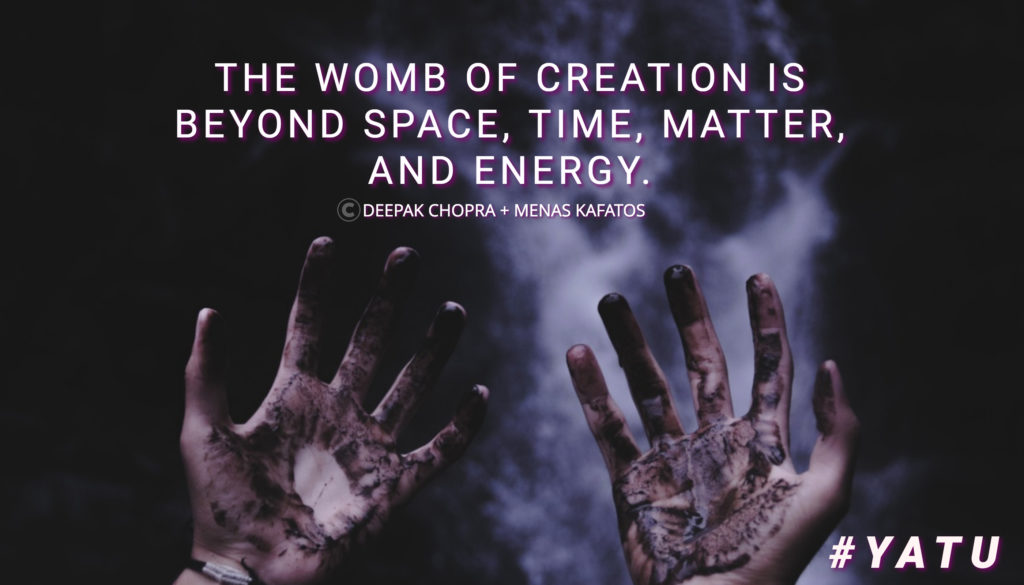 At first blush the universe doesn’t appear to be that way, tens to hundreds of billions of stars in as many as two trillion galaxies, although not directly observable with the naked eye can be studied with big telescopes such as the Hubble space telescope. But no matter how finely you dissect physical objects, whether the object is a drop of water or a massive nebula, in reality the inner workings of objects are totally invisible. The phrase used by physicists is “something out of nothing,” which refers to the fact that ground zero for creation is a void, the quantum vacuum. On that basis, both the brain and a star and an atom are examples of something coming out of nothing.

In our book You Are the Universe , we explore what might be emerging besides physical objects and the energy states they occupy. For it’s obvious that the brain doesn’t simply produce electrical and chemical activity at random. It somehow is tied to our inner world of sensations, thoughts, feelings, and images. Using these, we experience a three-dimensional world. So everything in that world is dependent on experience; if there is a reality outside what we can experience (including the extended perception of microscopes, telescopes, particle accelerators, and so on), such a reality will be as inaccessible as a dark hole.

By asserting, on the contrary, that the physical universe is a thing “out there,” independent of human existence, the vast majority of physicists are relying on common sense when common sense is wrong, just as it is wrong when we fall for the illusion that the sun rises in the east and sets in the west. For starters, what we take for granted as an external reality is actually the result of a sensory system, that is species-specific, in this case the human species. Our eyes do not see everything, they are limited by human sensory boundaries. In our book, we demolish this common-sense assumption and replace it with something far more valuable to human beings. By examining what the cosmos is actually doing, we find that the parallels between our brain and the invisible reality of the universe are remarkable.

For these reasons, it is quite reasonable to see the brain and the universe as equally the product of consciousness, the product of conscious experience. There is no evidence of thinking in the brain or in the physical objects “out there.” But because the brain displays activity that correlates with thinking, lighting up in specific areas according to what the mind is thinking, feeling, sensing, and so on, we infer consciousness to exist, and the same method, looking at cosmic activity to infer consciousness, holds good there, too. In fact, the notion that the human brain is the highest evolved object in creation has it exactly upside down–human evolution has been hitching a ride on the cosmos, taking advantage of its evolutionary force and its conscious activity in general.

For a long time, there has been an unsettled argument about whether matter gave rise to mind or mind gave rise to matter. The “matter first” position is scientific but has no proof on its side, because there is never a point where one can witness or measure atoms and molecules beginning to think. In fact, to say that the potassium and sodium ions passing back and forth through the cell membrane of a neuron–the activity that gives rise to a brain cell’s electrical charge–are “thinking” is obviously untrue. There is more evidence to uphold the “mind first” position held by idealist philosophers since Plato, because when we think and feel, brain chemistry changes. New molecules, such as the hormones triggered by the stress response, come into being according to our perception of stress.

Yet if we really want to know what the brain is doing as well as the cosmos, neither “matter first” or “mind first” is adequate. Both are needed as complementary aspects of the one reality. The universe is one thing acting as a whole, and so is the brain. For example, two particles in space separated by light years act in tandem, instantaneously changing together. But on a vastly smaller scale, different areas of the brain instantly correlate without sending signals between distant neurons. If you see your mother’s face in your mind’s eye, remember that you need to call her, and feel a burst of affection at the same time, three separate regions of the brain are instantly correlating. It’s not that one thing–the face, the reminder, and the emotion–came up first and told the others what to do.

It’s hard for mainstream science to accept, or even begin to credit, that consciousness pervades everything, much less that the universe, the brain, and everything else simply is consciousness. Locked in our preconceptions, we follow invalid assumptions that raise walls of separation for no better reason than convenience. What has been called “cosmic censorship”–the reality of how the inner workings of the universe remain hidden, such as what exists at the center of a black hole–holds true for the brain and its hidden workings. Physicists like to tell themselves that stars are real while the inner life of subjectivity is only inferred. The reality is that both are inferred, and until we accept that consciousness is basic to everything, we will be hitching a ride on the universe without knowing what the ride is all about.

Deepak Chopra MD, FACP, founder of The Chopra Foundation and co-founder of The Chopra Center for Wellbeing, is a world-renowned pioneer in integrative medicine and personal transformation, and is Board Certified in Internal Medicine, Endocrinology and Metabolism.  He is a Fellow of the American College of Physicians, Clinical Professor UCSD Medical School, researcher, Neurology and Psychiatry at Massachusetts General Hospital (MGH), and a member of the American Association of Clinical Endocrinologists. The World Post and The Huffington Post global internet survey ranked Chopra #17 influential thinker in the world and #1 in Medicine. Chopra is the author of more than 85 books translated into over 43 languages, including numerous New York Times bestsellers. His latest books are You Are the Universe co-authored with Menas Kafatos, PhD, and Quantum Healing (Revised and Updated): Exploring the Frontiers of Mind/Body Medicine.   discoveringyourcosmicself.com

Menas C. Kafatos is the Fletcher Jones Endowed Professor of Computational Physics, at Chapman University. He is a quantum physicist, cosmologist, and climate impacts researcher and works extensively on consciousness. He holds seminars and workshops for individuals, health and mental professionals, practitioners of contemplative traditions, and corporations on the natural laws that apply everywhere and are the foundations of the universe, for well-being and success. His doctoral thesis advisor was the renowned M.I.T. professor Philip Morrison who studied under J. Robert Oppenheimer. He has authored 315+ articles, is author or editor of  16 books, including The Conscious Universe (Springer), Looking In, Seeing Out (Theosophical Publishing House), and is co-author with Deepak Chopra of the forthcoming book, You Are the Universe (Harmony). He maintains a Huffington Post blog. You can learn more at http://www.menaskafatos.com