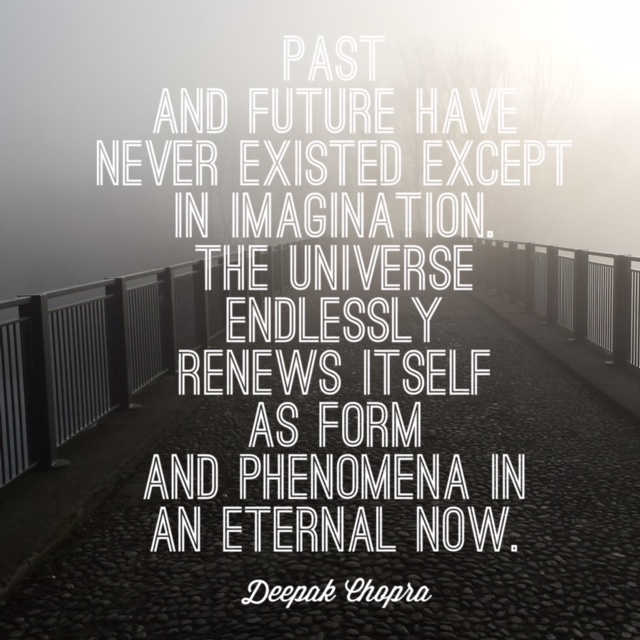 How to Make Quantum Reality Our Reality: Looking for a Better Deal

If you ask a scientist to talk about quantum mechanics, it’s predictable that the first thing he or she is likely to say is that this is the most successful theory in the history of science. At the minutest level of Nature, the overall behavior of subatomic particles such as electrons, photons, and quarks is amazingly predictable thanks to quantum theory. But strangely enough, this triumph has had almost no effect on our ordinary lives. And that’s not just because the quantum domain is so tiny, billions of times smaller than anything we can see with the naked eye.

The real reason is that the everyday world is isolated from the quantum world. An apple falling from a tree gives the non-scientist a handle for understanding gravity’s universal action. No such clear image comes to mind when we think of quantum processes. The strange behavior of subatomic particles doesn’t translate into how objects behave all around us. For decades quantum theory has tried to build a bridge between daily existence (described by classical physics) and the shadowy, seemingly alien world that nevertheless gives rise to everything in existence (described by quantum physics).

It’s no easy task, and even physicists who realize that all matter boils down to invisible clouds of probability still go to work driving a car, which behaves like a normal tangible object, not a cloud. How are we to understand quantum reality as our reality, too? A single word may hold the key: interaction. In the classical world (i.e., everyday reality) everything is built from small units interacting to form something larger. Society is built from the interactions of individuals; thoughts are built from the interaction of neurons in the brain; even a sand dune cannot form unless grains of sand interact with each other. As a fact of Nature, nothing is more obvious. The Mona Lisa is a work of genius, but it wouldn’t exist if molecules of paint didn’t interact with the canvas, causing the two to adhere. When Da Vinci tinkered with this process, his masterwork, The Last Supper, started to flake and crumble only a few years after its completion.

Is there a quantum clue hidden here? A historically overlooked approach called the Transactional Interpretation of Quantum Mechanics (TIQM) can shed new light on how everyday reality comes into existence. TIQM’s different way of understanding quantum theory was initially proposed in the Eighties by John G. Cramer at the University of Washington. In his interpretation, the transfer of tiny quantum objects is a two-way process, like a business transaction. In fact, the processes closely resembles a real-estate deal. The seller offers property, and one or more buyers responds by indicating an interest and a proposed bid. A negotiation then ensues, and one buyer is selected, receiving the property for the agreed upon price.

For the moment we’ll leave aside the technicalities, which are about how quantum behavior can act like either a particle or a wave. TIQM will be of value only if it can solve various problems, kinks, or glitches in quantum mechanics. Let’s turn to the famous puzzle known as ‘Schrödinger’s Cat.’ This unfortunate cat has been placed in a box with an unstable atom that may or may not send off a radioactive particle within one hour. If it does, the radioactive particle will set off a Geiger counter hooked up to a hammer that smashes a vial of poison gas and kills the cat. If the particle isn’t emitted, nothing happens, and the cat lives. The puzzle consists in the dual possibilities of the atom that serves as the trigger. It stays suspended with both possibilities—giving off a radioactive particle or not—simultaneously coexisting. This is known as “superposition” in quantum theory.

As soon as someone opens the box, they will see only one outcome, either a dead or live cat. But before the box is opened, if the atom holds both outcomes at the same time (superposition), then (according to the usual story) so must the cat, which makes it alive and dead at the same time. What is going wrong here? Obviously the real world, where cats are either alive or dead, hasn’t been bridged in any satisfactory way with the quantum world, where A and B, instead of being either/or, can be either/and—this is what superposition comes down to.

It turns out that there is probably a lot more going on that hasn’t been taken into account in the usual approaches to quantum reality. Specifically, whenever a quantum particle is emitted (offered), it prompts responses from prospective absorbers (buyers), as described in steps 2 and 3 of TIQM. The prospective absorbers in the Geiger counter respond to the atom’s offer, and it turns out that this leads to a real ‘collapse’ of its potential states—the particle is either conveyed to the Geiger counter within the hour or it isn’t. There is no need for any paradoxical superposition that persists during the hour, affecting the other objects in the experiment, including the worried cat.

The way Schrödinger’s Cat is usually interpreted overlooks the absorber response, and when we include it, we can understand why cats are never trapped in dicey superpositions. If a seller tries to offer something and it isn’t noticed or responded to by anyone, no deal can be concluded. This is what has been afflicting our understanding of quantum theory for so long: Conventional approaches take into account only what is being offered, not the responses to that offer. Therefore, the superposition seems as though it must continue through all parts of the experiment and into the realm of ordinary experience. It is as if a person trying to sell their home engages a realtor who is unable to drum up any interest, and so that realtor engages an advertiser who also fails to generate any interest—if this goes on, we end up with a whole string of people engaged in trying to sell a property that can never be transferred, because there is no response from any prospective buyer.

TIQM’s solution is to include responses to an offered quantum particle in the mix. ‘Bidding’ responses have a specific representation in quantum theory—it has been in the background there all along in a mathematical sense when calculating a result. TIQM says that there really is active participation by prospective buyers of quantum particle offers. This is what explains why we always have a definite result whenever we do a measurement. So why has TIQM been neglected? Because it includes one strange feature: The responses of prospective absorbers, which correspond to the negotiation stage in a real-estate transaction, seem to go backward in time (technically known as reverse causation). While an offer proceeds in the usual time sense, the confirming responses apparently proceed toward the past. This strikes many researchers as too high a price to pay for a solution to Schrödinger’s Cat. Interestingly, however, the TIQM interpretation precisely matches the mathematical formula that must be used to calculate the probabilities of outcomes in quantum theory.

If we take the mathematics of the theory in its most straightforward sense, the situation is even more surprising than the apparent backward-in-time behavior of the responses. It turns out the quantum offers and responding confirmations have a multi-dimensional quality that makes them too big to fit into the ordinary, spacetime world. So it appears that quantum negotiations aren’t actually going forward and backward in time at all. Rather, they are happening in a subtle, multi-dimensional realm that lies beyond spacetime. The events that we see in the everyday world of space and time arise only at the final stage, from the concluded transactions (closed deals) in this underlying Quantumland.

At first blush we seem to have defeated our original purpose. We didn’t set out just to rescue Schrödinger’s Cat, but to build a bridge from quantum reality to everyday reality. Now it seems that the two worlds are farther apart than ever. But that’s not so. If TIQM’s insight is correct, quantum particles are interacting in much the same way that everything in the classical world interacts, sending messages across the border between one world and the other. A connection has been made which may turn out to be the connection that seals the deal. A package mailed in China manages to cross borders that separate languages, races, nations, customs, and beliefs. Along the way, these barriers are subtly affected: there is much going on behind the scenes, even though to the naked eye nothing is happening except the passage of a wrapped parcel from location A to location B.

When you buy a Ming vase from Shanghai, you and the seller are interacting in subtle ways that go much deeper than a business transaction. In the same way, quantum transactions happen according to the customs of Quantumland, while negotiating for a new home follows the familiar customs of our land. Yet the concept of “transaction” is recognized in both places. The implications are amazingly far-reaching, but we’ll focus on only one. If quantum transactions are multi-dimensional, expanding beyond linear time, they also expand the usual notions of cause and effect, not to mention space and everything that interacts in space. In other words, our reality is far larger than it appears.

A quantum offer ripples throughout Quantumland, permeating every dimensional level. Could the same thing be happening when we perform an action or have a thought? Surprisingly, it appears that physics can accommodate just such a possibility. If this is right, human beings will be ready to escape our self-imprisonment in spacetime to explore the multi-dimensional domain that is our true home.

Ruth Kastner has an M.S. in physics and Ph.D. in Philosophy from the University of Maryland, College Park. She is a recipient of two National Science Foundation grants for research into the interpretation of quantum theory. Her latest book is Understanding Our Unseen Reality: Solving Quantum Riddles