Most people are too busy, or otherwise distracted, to think about how the mind works, much less about the vexed problem of connecting mind and brain. This includes neuroscientists. They run their experiments and publish new data without addressing the most fundamental questions. Their field runs nicely by simply assuming that the brain is the mind. After all, without a brain there cannot be any mental activity, QED. Why bother to go any deeper?

One reason is that human beings are clearly not brain-defined. We need the brain the way a musician needs a piano or TV news needs a television set–to carry the mind into the physical world. The belief held by 99% of neuroscientists is that with sophisticated enough brain scans and various other measurements, the mystery of thinking, feeling, sensing, and imagining will one day be solved. It’s a futile dream, however, because even the most basic issues, such as why the color red is red, how we hear sounds in a brain that is totally silent, and where a thought comes from are nowhere near being understood.

Leaving theory aside, there is a huge practical problem involved. What do we do when the brain makes us its victim? If we are brain-driven, this implies that the brain is in charge of daily habits, decisions, reflexes, and responses. In many cases this is clearly true. When you reach for ice cream at midnight telling yourself that it’s the wrong thing to do, who is making you act automatically, against your best interests, and without your ability to break the habit?

The answer is the conditioned brain. Conditioning is synonymous with training, and a conditioned brain is a tricky thing. Some of its training is voluntary and conscious, such as when a pilot is trained to fly a jumbo jet or any skill is learned. Some training is involuntary and unconscious, such as when children learn to be afraid of abusive parents. Some training is purely physical, as when addicts are conditioned to crave a drug because there is distorted functioning of opiate receptors in their neurons. 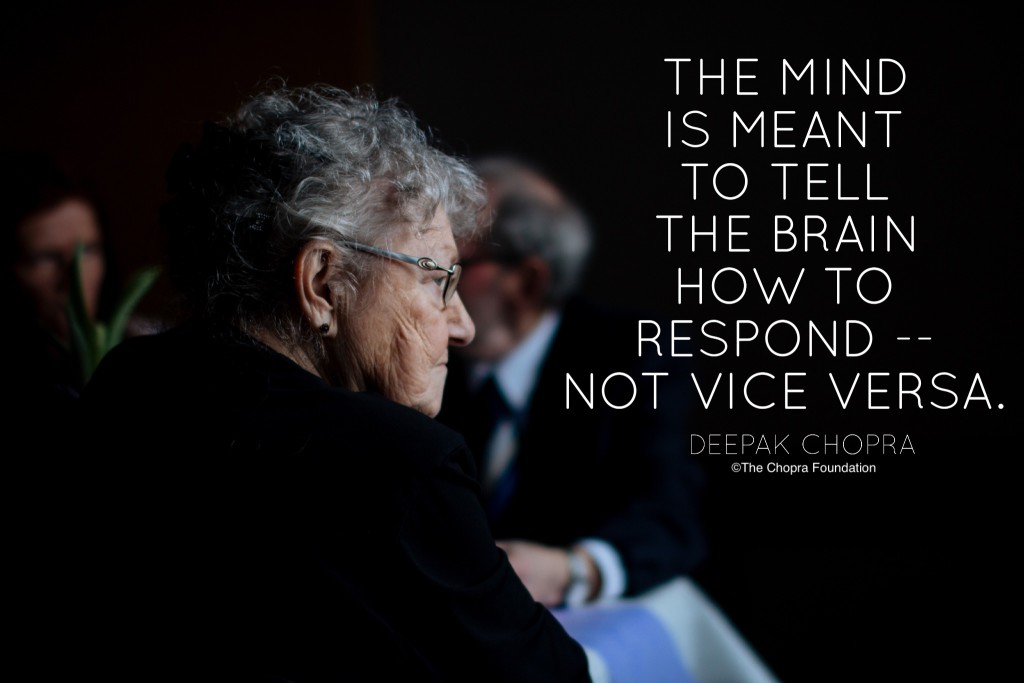 All of us walk around behaving as if we are not biological robots, and yet we live on the cusp of free will and determinism. In an era of triumphant neuroscience, determinism is no longer a religious or metaphysical issue. It’s the nitty-gritty of having a conditioned brain and what to do

about it. Can the brain get rid of its negative conditioning? Once a neural pathway is engraved deeply enough, can it be erased? No, the brain cannot uncondition itself any more than a dog can untrain itself to fetch a stick or a computer can write its own new operating system. There must be conscious mental intervention, and the evidence seems to be that new neural pathways can be established through many kinds of lifestyle interventions and new ways of thinking.

To stop being a biological robot is possible. The first step is to be aware of your robotic behaviors. The most common of these include:

— Having repetitive or obsessive thoughts.

— Being unable to control your impulses.

— Finding it difficult to impossible to change a bad habit.

— Relating to others with habitual responses; living in a ritualized relationship where the same issues persist year after year.

— Saying or thinking the same things day after day.

— Lacking new solutions to your problems.

— Feeling unable to get past ingrained fear and hostility.

— Being trapped in old memories, unable to get past emotional trauma from the past.

— Feeling that you need to be fixed but not finding a way to accomplish this.

This is a long and perhaps discouraging list; certainly the items on it can’t be changed all at once. But at bottom there is a common link at work, which is lack of awareness. Freedom of choice comes down to having enough awareness to overcome your old conditioning, whatever form that takes. The mind is meant to tell the brain how to respond, not vice versa. There are gray areas here. The brain exists in layers that range from the lower brain, which controls automatic responses like fight or flight that evolved millions of years ago, to the middle brain, where emotions evolved, to the higher brain, the newest part, responsible for higher reasoning and decision-making.

To stop being a biological robot begins in the higher brain, since it involves conscious choice, but emotions play their part (as when someone with a weight problem “eats their feelings”), and the stubborn responses of the lower brain, such as feeling attacked, often enter the

Having become aware that you are being driven by a conditioned brain, the next step is to alter how your mind relates to your brain. for this step to succeed, you need more than awareness. You must develop self-awareness. Since this is a complicated process that involves mind and body, biology and psychology, positive and negative input–and much more–the whole topic needs a post of its own.