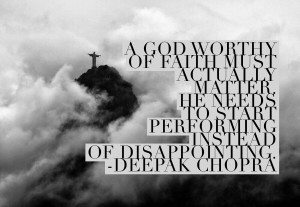 Recently I created a brief storm on Twitter by throwing out questions that physicists can’t answer. Twitter allows you to contact famous physicists directly, and it’s predictable that a handful will become irritated and even riled up if you dare to challenge them. “What happens in physics stays in physics” is their motto, apparently. But I’m on tour for a new book, The Future of God, and for decades, ever since the publication of books like The Tao of Physics and God and the New Physics, it’s become evident that physics can’t escape its meeting with God.   I don’t mean the clash between belief and atheism. What I cover in the book, and what makes some physicists with famous names turn ad hominem and outright abusive, is something else. They are going to need God to solve some fundamental questions about reality. Even more irritating to them, God exposes the current crisis in physics. After promising us that physics will one day have the answer for where the universe came from, what it’s made of, and where human beings belong in the cosmos, today physics may actually be farther away from an answer than ever. Such is the nature of the crisis.

God enters the picture through a word that most scientists heatedly reject: metaphysics. It’s barely an acceptable term and for all practical purposes has nothing to do with the day-to-day activity of doing physics. Metaphysics is about an invisible reality. It can be considered the domain of God or the gods, the soul, angels and devils, heavens and hells, life after death–the whole panoply of beliefs that science isn’t concerned with and supposedly protects us from if we consider ourselves rational beings.

But there is metaphysics that has none of these things in it–no personal God or gods, no soul, no angels, etc. Instead, going back to the ancient Greeks, metaphysics is a higher order of explanation, which is something we use every day. If you look at cars on the road, at one level they are physical objects randomly turning left and right, arbitrarily stopping at various buildings, only to start again at unpredictable intervals. But at a higher level of explanation, each driver has a purpose in mind; therefore, the turns, starts, and stops aren’t random but purposeful–they mean something. The cars they drive are a means to an end, and if you don’t understand the end, learning about the means has limited value.

No matter how much you learn about the physics of cars, not a single fact will tell you which car on the road is heading for the emergency room and which is heading home for Thanksgiving. We “go meta” quite naturally when we want to know “why” instead of “how.” Physics recognizes this distinction, and for a long time it stayed out of the “why” business. Isaac Newton was profoundly Christian, but he kept his religious beliefs out of his physics. God and gravity, metaphysics and physics, were not necessarily related.  Yet from the beginning this was a shotgun separation, because eventually certain issues involve both. These issues concern the origin of the universe, the nature of time and space, the relation between mind and brain, and so forth.

Physics feels assured, for the most part, that even these questions can be walled off from metaphysics–except they can’t. Using its best efforts to offer explanations that remain entirely physical, physics has offered no credible explanation for where the universe comes from, how mind works, where time and space originated, and what the basic “stuff” of the cosmos is. Physics has every right to keep God out of its high-speed particle accelerators, but metaphysics–a higher order of explanation–is the only way to answer some questions that can’t be unriddled any other way. The biggies are

What does it mean to exist?

How do we know things?

These are issues where “why” and “how” start to merge. “Why am I here?” is the same question as “How did I come to exist?”  In The Future of God I argue that there is a version of the deity that isn’t a patriarch sitting above the clouds but rather a God defined as the source of consciousness, and as such, the deity isn’t a myth, a matter of faith, a divine Father or Mother–in fact, such a God cannot be captured in words or images. God is pure “meta.” Physics needs such a God in order to find the higher order of answers that will rescue it from crisis.

Pointing this out–or even beginning to by asking hard questions–creates temper tantrums on Twitter. But there are many physicists who are willing to concede that science has reached a point where consciousness is crucial. There are no experiments that can prove what came before the Big Bang, or what dark energy and matter actually are, or why evolution appeared in the early universe, or how the mind is produced by the brain, if that is actually the case and not the other way around.

And where do you and I come in? People tend to agree that what happens in physics stays in physics. Except that asking “Why am I here?” is intimately related to “why is anything here?” whether you are referring to quarks, galaxies, or the universe itself. “Where is my life going?” is intimately related to “Why does anything evolve?”  The “meta” level of existence is freer than the material level. If my purpose is to get home for Thanksgiving, I can choose any means of conveyance–walking, driving a car, riding planes, trains, and buses. But the opposite isn’t true. If you walk, drive, or ride with no purpose, your feet, car, bus, or train only wanders randomly. Physical means can’t evolve into ends. How you do something will never tell you why.

Physicists who scorch with tweets don’t bother me. They only expose their isolation, arrogance, and self-willed blindness. The big questions about existence aren’t shop talk for mathematically savvy professionals working in arcane specializations. Existence is everyone’s business. That’s ultimately why physics needs God, and if God in fact is the source of consciousness–transcendent, immutable, without beginning or end, timeless, a field of infinite possibilities–it’s obvious that God doesn’t need physics. The beauty of this realization is that this field of infinite possibilities exists in us. It is here, now, and always. It is our very essence.