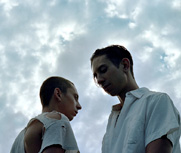 European Tour begins in April, including a Maida Vale Session for BBC Radio 1. Supported by Zomby at their recent album launch party at LPR in NYC. inc. played at and curated their own special edition of Boiler Room Los Angeles in February. Dazed & Confused have a 6 page interview feature with inc. in their March edition. The album streamed exclusively on FACT and Fader the week before release. Live videos recorded by Yours Truly hosted by Nowness and Rolling Stone. Their entrancing live show consists of a 5 piece band.

“no world is a fully-formed, splendidly fluid soundtrack to seduction… These gifted siblings have come of age.” – BBC

“A masterclass in sultry r’n’b and soul” – FACT

“inc. is refreshing, but not because it’s ordinary. Its fusion of smoky, high-pitched vocals and soulful, tricked out sounds is heady, sensual music, the type that both unsettles you with its cryptic shrieks and soothes you with its familiar rhythms.” – Fader