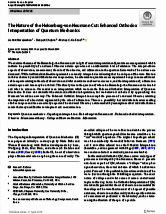 Abstract: We examine the issue of the Heisenberg-von Neumann cut in light of recent interpretations of quantum eraser experiments which indicate the possibility of a universal Observer outside space-time at an information level of existence. The delayed-choice aspects of observation, measurement, the role of the observer, and information in the quantum framework of the universe are discussed. While traditional double-slit experiments are usually interpreted as indicating that the collapse of the wave function involves choices by an individual observer in space-time, the extension to quantum eraser experiments brings in some additional subtle aspects relating to the role of observation and what constitutes an observer. Access to, and the interpretation of, information outside space and time may be involved. This directly ties to the question of where the Heisenberg-von Neumann cut is located and what its nature is. Our model is an interpretation which we term the Enhanced Orthodox Interpretation of Quantum Mechanics. It does not contradict the standard orthodox interpretation, but we believe it extends it by approaching von Neumann’s work in a new way. The Enhanced Orthodox Interpretation accepts the presence of a universal Observer, retaining the importance of observation augmented by the role of information. There is a possibility that individual observers making choices in space and time are actually aspects of the universal Observer, a state masked by assumptions about individual human minds that may need further development and re-examination.