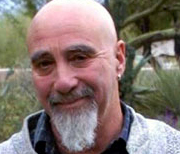 Stuart Hameroff is a physician and researcher at the University Medical Center. In medical school Hameroff became interested in intelligent behavior of microtubules, protein lattices within brain neurons and other living cells. Hameroff developed theories of microtubules as self-organizing molecular computers, and  teamed with Sir Roger Penrose on the controversial Penrose-Hameroff “Orch OR” model of consciousness. Based on quantum computing in brain microtubules, Orch OR connects brain activities to the most basic level of the universe – fundamental spacetime geometry at the Planck scale. At that level, Penrose has proposed Platonic information guiding or influencing conscious choices and perceptions. Orch OR could be seen as providing a plausibility argument for non-locality and spirituality. Hameroff is also involved with clinical trials of transcranial ultrasound (TUS) for mood and cognitive dysfunction, and co-organizes the biennial interdisciplinary ‘Tucson’ conference ‘Toward a Science of Consciousness’, the next being April 21-26, 2014. Hameroff’s research website is www.quantumconsciousness.org