Infinity has been getting a bad reputation recently. It has become the sticking point in the story we tell ourselves about reality. The trouble begins with a split between what is real and what is unreal. If you send someone to the store to buy three apples, and they return with only one, it matches reality to say, “you only brought me a third of what I wanted.”  This statement matches the way numbers are meant to behave. Numbers are pure in the sense that they are abstractions, ever-existing and perfect as the ancient Greek philosophers thought. They cannot be disturbed by real-world events. Yet they are reliable because they allow us to engineer the real world, from building bridges and cathedrals to manufacturing microchips. They are rational because they strictly obey mathematical order and perfect logic.

These three virtues are wobbly when it comes to infinity, however. Getting one apple instead of three represents a one-third return, and when written in decimals, one-third is .33333 out to infinity. In other words, it is an endless number, and “endless” isn’t something we can actually conceive. There is a mismatch between the real world and mathematics, and when it comes to advanced mathematics, the kind applied by physicists and cosmologists, the misbehavior of infinity becomes serious. (Actually, this is one kind of well-behaved infinity, because rational numbers like 1/3 can be known to any order and predicted in advance—the repetition of three continues ad infinitum. An irrational number like pi (π) is a different kind of infinity, since its digits are unpredictable and do not repeat.)

The noted physicist Max Tegmark wrote an article for Discover magazine in Feb. 2015 titled, “Infinity Is a Beautiful Concept – And It’s Ruining Physics.” The ruination exists on two disturbing fronts. The first front is theoretical. Physicists need valid, provable theories to explain the biggest and smallest things in nature. As it turns out, the smallest things, subatomic particles, wink out of sight and vanish into the quantum vacuum. The biggest things, including galactic and intergalactic matter and the universes itself, emerge from the same vacuum, and our universe was set on a course of seemingly almost infinite inflation a tiny fraction of a second after the Big Bang. The rub is that when calculating the behavior of cosmic inflation, infinity keeps intruding and destroying any reasonable prediction. To quote Tegmark, “. . .inflation always gives the same useless answer: infinity divided by infinity.”

The reasons for arriving at this useless calculation are technical, but the upshot isn’t: reality comes down to an inconceivable concept. Infinity also intrudes in the fashionable theory of the multiverse, which derives our universe by supposing that it is only one in an infinite, or nearly infinite, number of alternative universes. But for this to be true, there have to be reasonable calculations of the odds for producing our particular universe with all its vast number of stars and galaxies, and these don’t exist. There are infinite reasons for why the Big Bang produced the universe that led to life on Earth and infinite reasons why it might not have happened. This is surely a very unsatisfying situation.

Which brings us to the second level of infinity’s misbehavior, the practical one. The entire modern world depends on the normal behavior of numbers. They support the story we tell ourselves about nature being knowable, predictable, and open to modeling, engineering and manufacturing. If on the other hand nature is actually inconceivable, reality is not what our story tells us it is. The quantum revolution began the process of undermining everyday reality by dismantling the whole notion of solid objects reliably sitting in fixed positions in time and space. In fact, quantum field theory itself, the best successor we have to quantum mechanics, leads to infinities that have to be subtracted from infinities to give finite answers for the properties of quanta, as science demands. Most people don’t give two hoots about quantum theory, assuming in the back of their minds that physics has learned how to accommodate its strangeness.

That is far from true. The way that subatomic particles, universes, and the laws of nature emerge from a vacuum means that something came out of nothing, and physics hasn’t reached any consensus about how this occurs. Besides infinity, there is another contentious number, zero, which represents the vanishing point. What zero and infinity have in common is that they are concepts invented by the human mind, and they complement each other. Their appearance in the history of mathematics occurred as two separate events. Nature doesn’t exhibit either zero or infinity the same way that it exhibits three apples or billions of galaxies. Zero and infinity are where sensible numbers of everyday experience, used in counting objects, disappear, and mathematical conceptions begin. 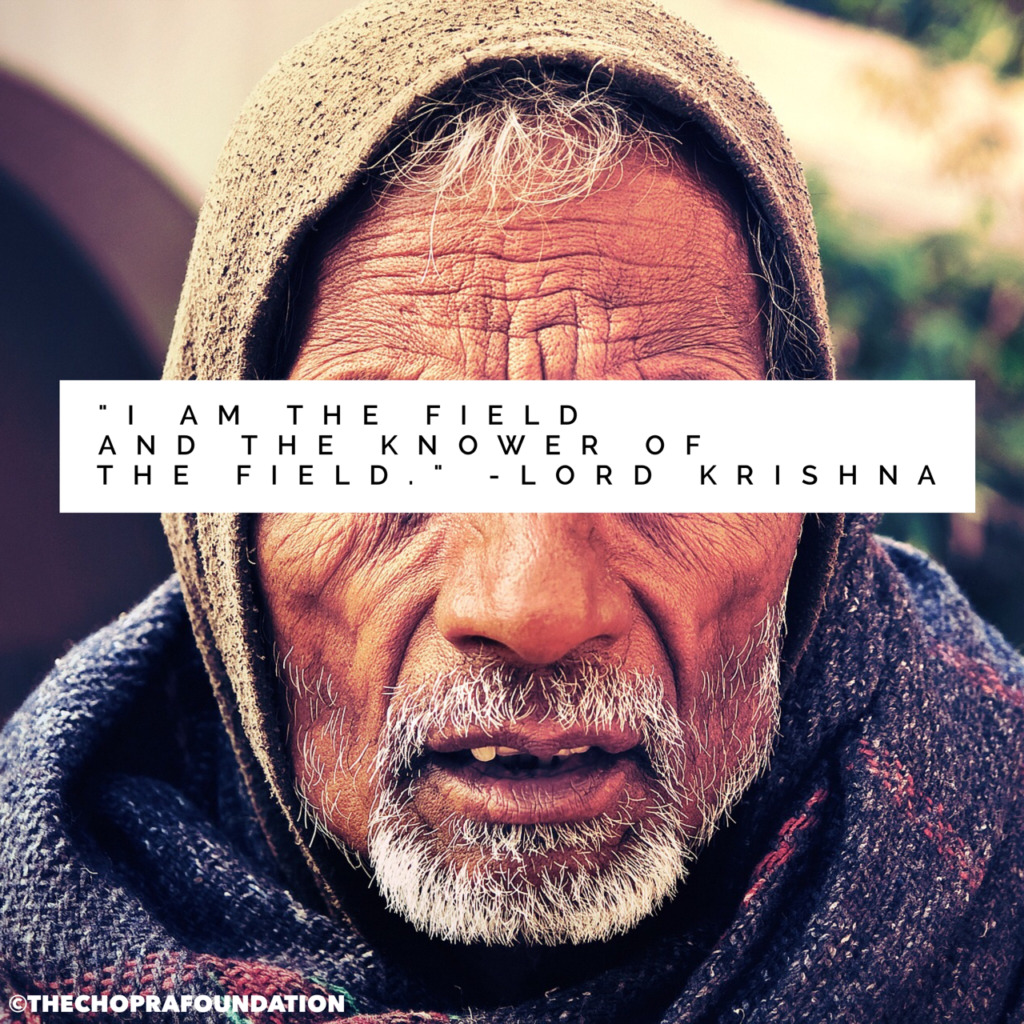 You can easily grasp this without being a mathematician. Imagine that you take an apple and try to cut it into the smallest thing in existence. The Greeks thought that such an object exists, which they named the atom, from roots words that mean “uncuttable.” But no such object exists by any name, because once you probe deep enough, subatomic particles transform into waves that extend infinitely in the quantum field, or viewed another way, their solidity turns into an illusion. The same holds true for the inflationary universe. When you blow up a balloon, you see it expand into the space around it. But in the case of the universe, there is no space around it; space itself is part of the inflation. Space-time in the modern jargon of relativity is embedded in the universe. So, what is around space? Or for that matter, what was “before” time began? There is no answer that matches anything we can conceive, because “around” already implies space and “before” already implies time. It is easier to see the conundrum in the case of time, because by definition the universe began at the Big Bang, not ‘before.” Therefore, asking what came before the Big Bang logically contradicts itself.

But we believe that the irksome way in which infinity intrudes into the equations of physics, along with that other bad boy, zero, is a kind of salvation. Theory is massaged by theorists. Reality impacts all of us; without venturing into the technicalities, the fact that infinity is a human concept supports an ancient view of reality going back to ancient India, which holds that the entire universe itself is a concept. It has no existence outside our story of reality, and once we hit upon a story, any story, nature conforms to it. Thus the illusion of reality is self-sustaining.

The reason that infinity brings a kind of salvation to the situation is that concepts have to have a source, just as universes do and reality itself. What if the same source is involved? Concepts, universes, and reality itself begin with the inconceivable, a fact not easy to live with. We humans need to make reality understandable by the rational mind. In physics, however, the inconceivable is far from outlandish. According to Werner Heisenberg, “The atoms or elementary particles themselves are not real; they form a world of potentialities or possibilities rather than one of things or facts.” This is not a statement by an ancient Greek or Indian philosopher; it is by one of the greatest quantum physicists of all time. Another esteemed physicist on the current scene, Sir Roger Penrose, comments, “Consciousness is the phenomenon whereby the universe’s very existence is known.”  Taking a broad view of the dilemmas facing physics, Freeman Dyson, also speaking from the top level of science, says, “It would not be surprising that the origin and destiny of the energy in the universe cannot be completely understood in isolation from the phenomena of life and consciousness. It is conceivable that life may have a larger role to play than we have imagined. . . Life may have succeeded against all odds in molding a universe to its purposes.”

Isolated quotes do not constitute a theory, but there are many ways that the current story of reality is cracking up. These quotes are useful because they bring the issues at hand close to our everyday language. Anyone can Google dark matter and energy, the multiverse, superstrings, nonlocality, quantum gravity, and entanglement with the same net result: a massive state of confusion and disagreement about how reality behaves at the farthest reaches of scientific observation. The riddle of why subatomic particles seemingly make choices and change states poses a challenge to the time-honored but artificial division between mind and matter.

So the way that infinity gums up the works is just one clue to a larger possibility, which is actually quite exciting, that we live in a field of infinite possibilities that will never been calculated or limited. This is an infinity close to our lives even though it can’t be captured by the finite rational mind. If the field of infinite possibilities were only theoretical, everyone could continue to not give two hoots about quantum mechanics. But if we are at the center of this field, then like Lord Krishna in the Bhagavad-Gita, we should be saying “I am the field and the knower of the field.” This could well be what reality is trying to tell us right this minute.

Deepak Chopra MD, FACP, founder of The Chopra Foundation and co-founder of The Chopra Center for Wellbeing, is a world-renowned pioneer in integrative medicine and personal transformation, and is Board Certified in Internal Medicine, Endocrinology and Metabolism.  He is a Fellow of the American College of Physicians and a member of the American Association of Clinical Endocrinologists. The World Post and The Huffington Post global internet survey ranked Chopra #17 influential thinker in the world and #1 in Medicine. Chopra is the author of more than 80 books translated into over 43 languages, including numerous New York Times bestsellers. His latest books are Super Genes co-authored with Rudolph Tanzi, PhD  and Quantum Healing (Revised and Updated): Exploring the Frontiers of Mind/Body Medicine.  www.deepakchopra.com

Menas C. Kafatos, Ph.D., is the Fletcher Jones Endowed Professor of Computational Physics, and Director of the Center of Excellence of Earth Systems Modeling and Observations at Chapman University; Visiting Professor, Division of Environmental Science & Ecological Engineering, and Advisor BK21 Plus Eco-Leader Education Center, Korea University, Seoul, Korea; and Affiliated Researcher, National Observatory of Athens, Greece. He is a quantum physicist, cosmologist, and climate change researcher and works extensively on consciousness. He holds seminars and workshops for individuals and organizations on the natural laws that apply everywhere and are the foundations of the universe, for well-being and success. His doctoral thesis advisor was the renowned M.I.T. professor Philip Morrison who studied under J. Robert Oppenheimer. He has authored 310+ articles, is author or editor of 15 books, including The Conscious Universe (Springer), Looking In, Seeing Out (Theosophical Publishing House), and is co-author with Deepak Chopra of the forthcoming book, You Are the Universe (Harmony). He maintains a Huffington Post blog. You can learn more at http://www.menaskafatos.com