By Deepak Chopra, MD
A common trait in every civilization known to us is now fast disappearing. This trait is the thirst for knowing the self. Most people have read that the ancient Greeks pursued the goal of “Know thyself,” but they do not realize that self-inquiry also stood at the very center of the great spiritual traditions in India, China, and the Judeo-Christian world. Today, a need to know thyself–in other words, to answer the question, “Who am I?”–by no means stands at the heart of civilization either East or West.

We have learned to accept, passively or with eager enthusiasm, some guiding principles that erode the entire value of self-inquiry. Among these principles are the following:

The only true knowledge is factual and data driven.

The greatest knowers of reality are scientists.

So-called spiritual knowledge doesn’t exist–such claims were part of a world riddled with superstitions and myths.

To look inward is a waste of time, since real knowledge of the mind will be revealed completely by studying the brain.

In one way or another these principles are the foundation of modern secular society. In many quarters a broad brush is applied to all spirituality as merely pre-scientific mumbo-jumbo, and the past is looked upon as one thing only: the benighted precursor to the advent of science. So be it. In the face of secularism, no one can claim that the institutions which exist as repositories of spirit, mainly organized religion, are tending upward. Their decline is inevitable and speeding up–so most educated observers believe.

But a funny thing happened on the way to absolute secularism. Science ran into two questions that to date have proved seriously unsolvable. The first is “What is the universe made of?” The second is “What is the biological basis of consciousness?” Both are objective questions about external facts, so it would be surprising–even revolutionary–if they eventually led us back to the inner world and the all but lost thirst for self-inquiry.

Most people do not realize that these two questions are the greatest mysteries in science, because it is assumed that a) the universe is made of atoms and subatomic particles, and b) the brain produces the mind, or consciousness. Yet if we look without rose-tinted glasses at these assumptions, they have no scientific foundation. Of course atoms and subatomic particles exist, but they are not the ultimate things that make up the universe. Solid, substantial matter vanished with the quantum revolution over a century ago, and contemporary physics stands baffled at the threshold of a world that precedes and underlies the quantum world. From this unknown domain emerged the big bang, and at this very instant every subatomic particle winks in and out of the same region.

The precreated state is inconceivable, because it produces the four things needed to uphold existence–time, space, matter, and energy–while itself transcending all of them. The quantum vacuum state, as it is generally known, is a field of infinite possibilities that itself has no known qualities we are familiar with–no color, shape, dimension, time, matter, or energy. If our universe, along with every cell in our bodies, derives from an inconceivable source, this seriously undercuts science’s claim to be the best knower of reality in the history of mankind. In fact, science is one thing only: a method of collecting facts through objective measurement and data. That is hardly the be-all and end-all of knowing reality.

The second open question is how to connect biology and mind. This is the so-called hard problem o 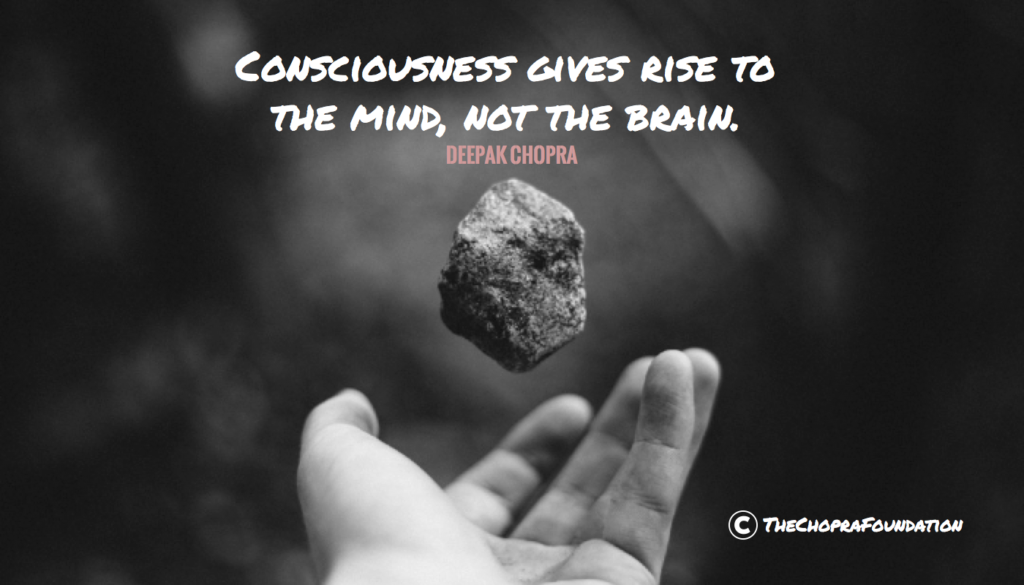 f consciousness. For a very long time science had no interest in consciousness. It was simply a given, like the air we breathe. But it has always been clear, to anyone who looked, that the brain is a weak origin for the mind. Inside the brain there is no light, sound, color, taste, smell–nothing like that. The brain’s interior is a dark, moist place where chemical reactions and electrical signals are concentrated; in less concentrated form, the same activity is taking place in heart, liver, and kidney cells. Yet somehow the brain is credited with producing the three-dimensional picture we call reality, complete with all five senses. No one has the slightest idea how gaggles of neurons perform this trick.

The easy answer to both mysteries is exactly the same. Consciousness gives rise to the mind, not the brain. The experience of physical reality is a mode of consciousness; in fact, there is nothing real that isn’t made real by consciousness. This can be called the easy answer to the hard problem. Needless to say, it creates consternation in scientific circles, although at the

cutting edge, many open-minded theorists are beginning to see why this answer is valid. But for centuries, self-inquiry led to the conclusion that consciousness is the source of reality.

If we eventually arrive at a point in history where consciousness is central, it will be like recovering a lost world. At that point, the old language from bygone civilizations won’t be hauled in and repurposed. This is a good thing, because the purity of self-inquiry devolved into religious dogma, with its insistence on God or the gods. None of that religious apparatus was part of the original project. The original project was an attempt to expand self-awareness until it recognized and knew its own source. The principles that guided this project are almost the opposite of the assumptions listed at the beginning of this article. They include the following:

Consciousness is not a byproduct of matter. Consciousness exists independently of the physical world and always has.

Reality is entirely experience-based. What we cannot experience doesn’t exist, not insofar as human awareness is concerned.

Each person creates reality, serving as a conscious agent who experiences, perceives, and interprets the contents of mind.

Everything in existence is a mode of consciousness interacting with itself.

The individual self or “I” participates in the cosmic mind.

You’ll notice that these principles sound abstract and metaphysical, while the first set of principles listed at the beginning are simple, obvious, and roll easily off the tongue. That’s because we are so used to them, whereas self-inquiry into consciousness has become such a lost art that even venturing into it feels like exploring terra incognita. Ironically, the last dark place on the map is our own inner world. Doubly ironic is that insistence, by the gatekeepers of official knowledge, that nothing valuable can be found by looking inward. It will take time to shift the perception that science, as currently practiced, holds all the answers. And yet we have only a limited amount of time before some crushing challenges–climate change, pollution, overpopulation, refugeeism, religious fanaticism, and epidemic disease–tighten their grip beyond repair.

These problems can only be solved by a fresh infusion of humanity, not by technology. In our humanity is our salvation, a truth nearly lost in the welter of secular culture. Our need isn’t for God or the gods. It isn’t for a new set of religious rules and rituals. What we desperately need is

to know ourselves enough to value life and the planet, along with every other human being. The easy answer to the hard problem may feel like a strange place to begin this journey, but in fact it is the right and only place.