By Marty Zucker, Gaetan Chevalier, PhD, Clint Ober, Paul J. Mills, Deepak Chopra, MD
The Earth is like a gigantic battery that contains a natural, subtle electric charge—a special kind of energy present in the ground. For safety and stability, almost everything in the electrical world is connected to the ground, whether it is an electric power plant or your refrigerator. That’s what the term “grounded” means.

Being grounded also applies to people. When you are electrically grounded, when you maintain your body at earth’s electric potential, you feel:

Overall, you feel good. If you have pain, you have less of it, or maybe none at all, when electrically grounded to the earth.

Many people live with daily pain and constant stress, anxiety, depression, and fatigue. They feel out-of-sorts, not centered, strong, or solid. Doctors often can’t find the cause and resort to prescribing medications that produce side effects like fatigue, poor mood, and headaches. 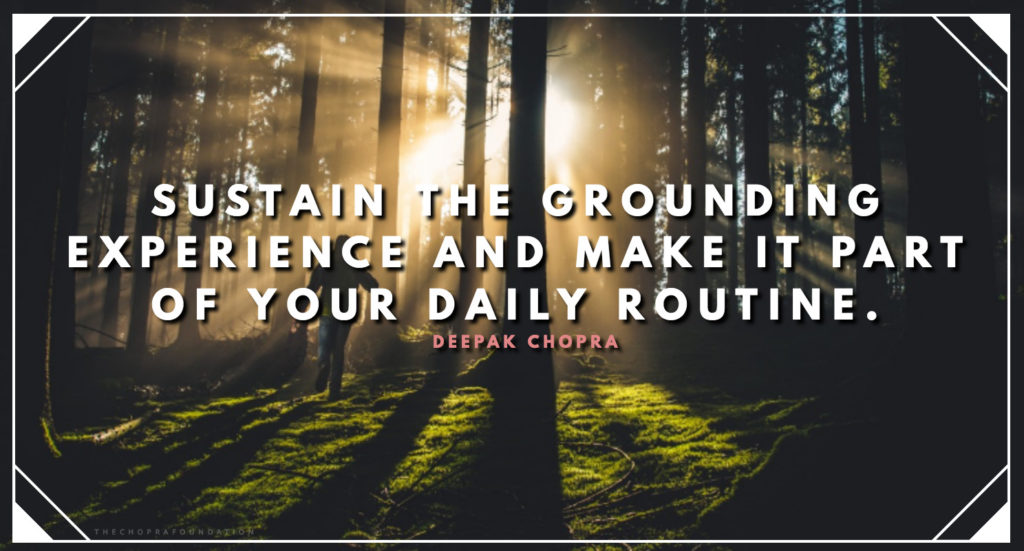 Researchers don’t know the specific causes behind the steep increases in a diversity of illnesses. Some say it is because people are eating more unnatural foods than ever and that the ingredients in these foods could be harmful, others point to increased exposure to environmental pollutants.

While certain lifestyle approaches such as meditation and yoga can help, there are limitations to their effectiveness for many of these illnesses.

The Art of Grounding

We are bioelectrical beings living on an electrical planet. Our bodies operate electrically. All of our cells transmit multiple frequencies that run our heart, immune system, muscles, and nervous system.

wear natural leather shoes that allow us to absorb the ground’s energy. For the last 50 years or so, most people have been wearing plastic soled shoes that act as a barrier to the Earth’s energy, insulating them from electrical contact with the Earth. People also generally don’t sleep on the ground anymore. They live and work above the ground, even far above the ground in high-rises.

The truth is, we are disconnected, ungrounded, out of touch with the Earth. Might this disconnection be a factor in the onset of some illnesses?

Scientific research over the past decade indicates that our bodies can be protected and helped—and that we feel better—when we are electrically connected to the Earth. That is, when we are grounded. Here are three examples of benefits that have been reported in scientific research studies (these studies are listed at the end of this article):

1. Decreased Levels of Inflammation and Pain

Being grounded can help relieve inflammation. In a small pilot study of 12 subjects, results indicated that grounding the human body during sleep reduces night-time levels of cortisol and resynchronizes cortisol hormone secretion more in alignment with the natural 24-hour circadian rhythm profile. In one case, medical thermal imaging was used to image a 44-year-old woman with chronic back pain. Images taken after being grounded while sleeping for four nights, as compared to before grounding, showed a reductions in inflammation, at which time the woman also reported:

After four weeks of continued grounding while sleeping, she reported:

By eight weeks, she reported that her pain was gone.

When grounded, the diurnal rhythm of the stress hormone, cortisol, begins to normalize. Cortisol is a vital part of our body’s stress response system and helps control blood sugar levels, regulate metabolism and inflammation, and assist with memory formulation. A study that examined the diurnal rhythm of cortisol after sleeping grounded showed a normalization of the rhythm. In addition to a normalization of the rhythm, participants in this study also slept better and woke up feeling more refreshed.

When we are grounded our circulation improves, aiding in the delivery of oxygen and nutrients to the tissues in the body, including better blood flow to the face. These were findings of a study that used a laser speckle contrast camera to quantify facial blood flow in response to one hour of grounding.

How to Reconnect to the Earth

While the research on grounding is relatively new, the practice is timeless. Past societies went barefoot or wore leather footwear made from hides that allowed the energy of the Earth to rise up into their bodies. They were grounded.

In modern society, most of us have lost our electrical roots, so to speak. We are disconnected and this disconnection may be a seriously overlooked cause of human pain and discomfort and the steady rise of chronic illness worldwide.

The good news is we can easily get grounded. Weather and schedule permitting, go barefoot for a half-hour or more, go outside and see what a difference that makes on your pain or stress level. Sit, stand, or walk on soil, grass, sand, or concrete. These are all conductive surfaces from which your body can draw the Earth’s energy. Wood, asphalt, and vinyl are not conductive.

For many people, however, there isn’t time in their busy days to go out barefoot. There are, fortunately, indoor options. Investing in grounding products, such as grounding mats or chairs, can be used to remain electrically grounded to the earth while sleeping, relaxing, or working.

Ideally, you want to sustain the grounding experience and make it a part of your daily routine.

Further Reading and References to the findings discussed in this article.

2. The effects of grounding (earthing) on inflammation, the immune response, wound healing, and prevention and treatment of chronic inflammatory and autoimmune diseases.

3. The effect of grounding the human body on mood.

5. Earthing: health implications of reconnecting the human body to the Earth’s surface electrons.

6. The biologic effects of grounding the human body during sleep as measured by cortisol levels and subjective reporting of sleep, pain, and stress.

Marty has written extensively on natural healing, fitness, and alternative medicine for nearly 40 years and has co-authored or ghostwritten more than a dozen books during that time, including Earthing (Basic Health Publications, 2014, second edition), co-authored with Clint Ober and cardiologist Stephen T. Sinatra, M.D. His previous books include Reverse Heart Disease Now (John Wiley & Sons, 2006), Natural Hormone Balance for Women (Pocket Books, 2002), and The Miracle of MSM (Berkley Trade, 1999). He is a former Associated Press foreign correspondent in Europe and the Middle East.

Gaétan has his PH.D. in engineering physics and specializations in Atomic Physics and Laser Spectroscopy. He spent four years of researching plasma physics and nuclear fusion at UCLA, and then served as a professor at the California Institute for Human Science (CIHS). Dr. Chevalier is currently lead faculty at CIHS, visiting scholar in the Department of Family Medicine & Public Health, School of Medicine, UC San Diego.

Thirty-year veteran of the cable television industry, Clint pioneered cable modem and satellite distribution of digital services via cable to personal computers. In 1998, he began investigating the effects of electrically grounding the human body to earth. He has promoted and supported 20 research studies that collectively demonstrate how maintaining the body at earth’s electrical potential reduces inflammation and promotes normal functioning of the body’s electrical systems. Clint is currently President of Earth FX Inc. in Thousand Palms, CA.

Professor of Family Medicine and Public Health and Director of the Center of Excellence for Research and Training in Integrative Health at the University of California, San Diego. He is Principal Investigator of the Self-Directed Biological Transformation Initiative, a randomized trial that is examining the psychosocial and biological effects of whole-systems medicine approaches to wellbeing.

Founder of The Chopra Foundation and the Chopra Center for Wellbeing, and Co-Founder of JIYO.COM, which sells grounding products. Clinical Professor of Family Medicine and Public Health at the University of California, San Diego.