Will the “Real” Reality Please Stand Up?

One peculiarity of our times is that people are so quick to accept the reality they see, hear, touch, taste, and smell. We do this automatically, disregarding the fact that every preceding age was totally mystified by existence, to the point that mystics, poets, philosophers, sages, and spiritual teachers, without exception, insisted that there was an invisible, hidden dimension which constituted the “real” reality. In a hidden realm could be found God and the gods, heavens and hells, a domain of perfect forms (according to Plato), Nirvana (according to the Buddha), or some version of spirits, ancestors, shamanistic creatures, and so on.

Where did this “real” reality go? The easy answer was simple. The hidden dimension was extinguished by science. In a scientific age, nothing was considered real unless it was formed by bits of matter (molecules, atoms, subatomic particles) bound by elementary forces. On this foundation, which is often called physicalism, reality became consistent from top to bottom, from the farthest galaxies to the domain of the quantum, leaving everyday reality—rocks, people, trees, the Republican Party—sandwiched in between. Until very recently, physicalism provided a seamless picture of existence, minus all the gods and monsters relegated to the past.

But the easy answer has been unsatisfactory for over a century, even by the standards of science, and now physicalism hangs on by dint of scientific superstition, given that actually proving it is impossible. Without a doubt modern physics has revived a hidden, invisible, formless dimension that exists beyond time and space. This dimension preceded the Big Bang (with apologies for using “preceded,” since the word implies time, and there is strong evidence that time came into existence only with or even after the Big Bang.) Without going into detail, we can accept what modern cosmology asserts, that something came out of nothing, the something being our universe and the nothing a formless dimension we can dub the pre-created state (even though there are problems with any word assigned to describe it, since words are a creation in time and space also).

So the mystery of the “real” reality has returned with a vengeance. This poses an immediate intellectual challenge, to find a way to understand the pre-created state but also a second, more practical challenge, how to adjust our lives, if we need to, to a completely new reality. Let’s confront the first challenge now, with a future post devoted to the second. There are three routes to solving the mystery of the “real” reality:

1. Plug away at it with the tools of modern science until an answer is arrived at. This is the default position of most scientists, who assume that the triumphal march of the scientific method, based on measurement, data collection, and experiments, cannot be stopped.

2. Surrender to the fact that a timeless realm beyond our universe will never yield to modern science, because aside from mathematical conjecture (which abounds), our minds cannot wrap themselves around it. This is a minority position occupied largely by a handful of philosophically minded theorists who believe that physicalism is naïve in the face of a formless, dimensionless domain totally alien to the human brain, which without a doubt requires time, space, matter, and energy in order to exist—these are the very things we must do without in order to describe the hidden dimension.

3. Develop a new method of inquiry that can work reliably outside physicalism. This new method won’t be science, religion, or mysticism as they are usually pigeonholed, but it could be feasible as a new paradigm. 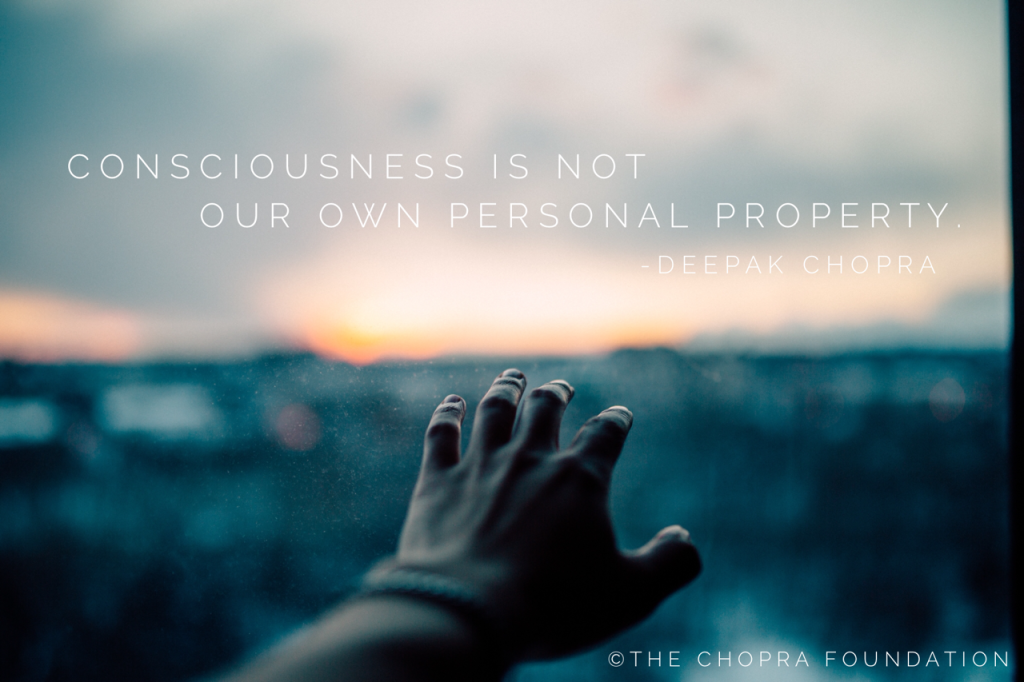 You can see that the third route is the most optimistic, since the first has no sound basis and the second amounts to giving up. But in order for a new paradigm to create a reliable kind of investigation, it faces one seemingly impossible hurdle. It must comprehend the “real” reality without relying on time, space, matter, and energy. This seems to imply that we must think about the hidden dimension without using the human brain—a tough obstacle, indeed.

Yet there is a way forward, which is currently being developed by a cadre of theorists who propose that consciousness is the answer. If we live in a conscious universe, there is no need for any of the assumptions of physicalism. Instead of accepting matter and energy as absolutes in creation, every phenomenon becomes a modality of consciousness. In everyday life we accept that only thoughts, feelings, sensations, and images in the brain stand for conscious activity. This makes the brain a privileged object in creation. Even though it is obvious that the brain is made of the same chemicals as a banana, activated by the same forces as lightning, the superstition of physicalism treats the brain as unique in the universe (so far as we know).

If we take the drastic step of demoting the human brain from its (false) privileged position, reality shifts just where we need it to, toward a single entity that is totally consistent, uniform, evolving, self-created, self-regulated, and self-governing. That’s a huge chunk to bite off, but in fact we attribute these very qualities to our brain and to thinking itself. If we shake off the last vestige of physicalism—and why not, since its foundations crumbled long ago? —the primacy of consciousness leads to the following remarkable insights:

* The fossil record, which holds the history of life on Earth, is still accurate. But its existence came about as a human experience and a human interpretation of that experience.

* All biological organisms, including dinosaurs and us, exist in the same way: as perceptual and cognitive experiences in consciousness. Consciousness is not our personal property. We experience the fossil record in our awareness just as we experience our own body-mind in awareness. From the perspective of sensations, images, feelings, and thoughts. Matter and energy “out there” has no privileged status, since even a far-flung galaxy is knowable only as a perception in our awareness. “In here” and “out there” occupy a level playing field.

* Matter, including rocks, tress, clouds, and stars, is an interpretation of our experience in human consciousness. We create our version of reality strictly according to our localized species of consciousness, nothing else. To Bo, a dog at the White House, his species of consciousness creates a different reality. Bo doesn’t know that his owner is the President, for example. That’s a story invented by humans, as are race, nationality, gods, money, myths, latitude, longitude, Darwinism, etc.

* Science itself is a human story invented in human consciousness.

* If we try to reduce our stories to something more basic, known as raw experience, what we arrive at as building blocks are no longer atoms and subatomic particles but the qualia (qualities) of experience. These begin with sight, sound, touch, taste, and smell, none of which exist outside us. Photons are not bright; roses have no fragrance; thunder isn’t loud in any intrinsic way. Raw experience is a species-specific collection of sensations, images, feelings, and thoughts. These constitute our perceptions.

* The physical universe therefore is actually the perceptual universe. It exists, insofar as we can know it at all, through our own experience and interpretation. Nothing “out there” has any property we do not assign to it.

* If we attempt to go beyond the human-created universe, we arrive at something inexplicable, which would seem to pose the same insurmountable problem faced by physicalism: something comes out of nothing. Only in this case, consciousness has no pre-created state. It is already without form and dimension, here and now, in everyday life. There is no need for an alien domain devoid of consciousness. Consciousness embraces time and the timeless, dimension and the dimensionless, here and there, then and now.

* Since consciousness is in fact the “real” reality, the rest is a story, a useful narrative for creating history, psychology, the hard sciences, and so on. At present technology is pivotal in the story, since it redounds to our benefit but could also lead to our ultimate extinction through a variety of means, from nuclear warfare and robot armies to eco disasters.

* Yet no matter how worried or encouraged our story may be, all stories are a model of reality, not reality itself. Reality cannot be modeled, because its basic materials have no qualities we can touch, taste, smell, think about, or perceive in any way. Reduced to a formula, Reality = Existence + Awareness of Existence.

* Language plays a crucial role in disguising the “real” reality. We gave names to perceived forms, and then bought into the de facto reality of these forms (matter, energy, brain, universe, etc.). The truth is that all phenomena are united as activities arising in consciousness, persisting for a while, and then subsiding back into the formless state of pure consciousness, the way that waves arise and fall in the ocean. By buying into the play of name and form, we got bamboozled into the superstition of matter as the essence of what is real. In fact, matter is an object lesson is illusion.

These insights have existed in the world’s wisdom traditions for centuries, both East and West, and the hope of modern science that such traditions could be ignored has come back to bite us.

At the very least everyone must agree that the “real” reality is wonderfully inexplicable. Why this matters to everyday existence is the topic of the next post.

(To be cont.) Deepak Chopra MD, FACP, founder of The Chopra Foundation and co-founder of The Chopra Center for Wellbeing, is a world-renowned pioneer in integrative medicine and personal transformation, and is Board Certified in Internal Medicine, Endocrinology and Metabolism. He is a Fellow of the American College of Physicians and a member of the American Association of Clinical Endocrinologists. Chopra is the author of more than 80 books translated into over 43 languages, including numerous New York Times bestsellers. His latest books are Super Genes co-authored with Rudolph Tanzi, PhD and Quantum Healing (Revised and Updated): Exploring the Frontiers of Mind/Body Medicine. www.deepakchopra.com