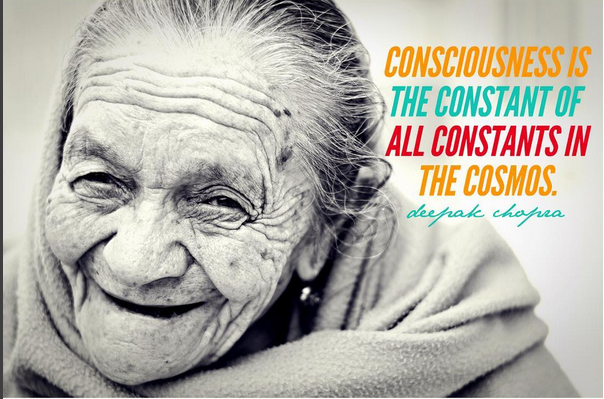 Whenever there’s a new breakthrough in science, a closer step is taken to seeing reality as a whole. Essentially science works on the jigsaw-puzzle principle: Having taken apart a picture of the Eiffel Tower or the Grand Canyon, reassembling the pieces gives you the whole picture again. Applied to science, cancer research pursues a hundred clues in the hope of discovering what makes a cell suddenly turn cancerous. The whole picture (a tumor) is being broken down in the hope that a view can be gained of cancer itself. In physics, most people have heard of the Theory of Everything (TOE), which would combine the four fundamental forces in nature into a single picture of the universe.

But after almost a century of investigation, it is dawning on some prominent physicists, such as Stephen Hawking, that a TOE may be impossible. Instead of reassembling the whole universe out of its basic parts, something isn’t working, and that something goes right to the heart of what the quantum revolution did to science over a century ago. The common-sense world we live in, a world of solid objects that stay in place and only move if a force, or cause, makes them move, no longer suffices. Quantum objects, such as subatomic particles, aren’t solid. They don’t stay in one place, and their activity doesn’t obey simple cause-and-effect. In essence, pieces of the puzzle that refuse to fit together are why Hawking and others believe that perhaps physics will wind up like a country with dozens of regional rulers and no king to unite them. Instead of a TOE, the best we may do is a patchwork of specialized theories such as general relativity and quantum electrodynamics that explain parts of reality but never the whole.

If this conclusion was applied to making Hondas, no one would accept it. Imagine an automobile factory where the engine, chassis, and drive train are constructed with exact precision, but at the end of the assembly line the foreman says, “The parts are perfect, but we can’t make a car out of them.” In terms of cosmology, the study of how the universe began, something similar has occurred. At any given moment, going back 13.7 billion years, the universe seemed to behave as a whole—it was one thing, like a Honda humming down the highway. But cosmologists can’t describe everything about what that one thing was or is in a single theory, even though we believe the working parts—matter, energy, time, and space—are understood down to the finest, subatomic level.

Is this one of those frustrating cases where you can’t get there from here? Are we stymied by a model of reality that’s outmoded and needs to be replaced? There are enough clues to indicate that a new model may be possible, one in which the behavior of the universe can be understood as a whole. Perhaps the answer lies, not in trying to rescue the common-sense world with its solid objects and obedience to cause-and-effect but exactly the opposite: by taking the quantum world as the norm, however peculiar it looks to common sense.

Two quantum behaviors serve as a promising beginning, known to physicists as nonlocality and acausality. Nonlocality describes how two particles separated in space, even by millions of light years, act in concert, as if each one knows what the other is doing.  Acausality describes how quantum activity may occur without any apparent cause or time ordering.

It’s common in the study of identical twins to find an inexplicable connection between the two siblings. Their bond goes beyond having similar thoughts and feelings at the same time—something we all experience occasionally—to what can appear to be  truly uncanny. One twin may know at the very instant it happens that the other twin has been in a serious accident or died. In rare cases twins separated at birth are reunited and discover that they married spouses with the same name, have the same number of children, and are in the same line of work. This is analogous to nonlocality, an inexplicable bond between separated particles that has been convincingly demonstrated in physics.

To grasp the importance of nonlocality, we have to backtrack a little. Quantum physics (also known as quantum mechanics, or QM) is the study of quanta – tiny pieces of matter that make up all physical objects, including our bodies, and are thus the building blocks of reality as we know it. A fascination with quantum mechanics extends well beyond physicists to philosophers, religionists, and the curious layman, because it is not actually “mechanical” or mechanistic at all, in the sense of ordinary everyday mechanics where, for example, the initial break in a game of pool causes the balls to fly around the table, ricocheting off one another and the rails.  In the quantum world events instead occur “probabilistically,” i.e., by the laws of chance, and what happens to a tiny object on one side of the room (or the galaxy) can impact in Wonderland fashion what happens to a tiny object on the other side of the room (or galaxy) without touching or sharing any kind of contact through a force.

The phenomenon of objects impacting one another at great distance is part of “quantum entanglement.”  Quantum entanglement is another term for the principle we want to understand in this post, quantum nonlocality, by which tiny objects initially interact, then move any distance apart and still impact one another. The tiny objects can be quanta, like electrons and photons, or even larger bits of matter like atoms and molecules. In the common-sense world a table, a chair, and the person sitting in the chair are local, meaning independent of each other. When the person gets up and walks across the room, we don’t see the table and chair following him. But when an object is nonlocal, its influence extends beyond its location in space; in fact, it has some sort of influence everywhere at once, as if two identical twins know what each other is thinking but so does every other person in the world.

Quantum systems can also display what appears to be atypical time ordering, where what happens at the end of an experiment seems to impact what occurs at the beginning. This behavior defies our understanding of the operation of cause-and-effect, which is linear, meaning that cause A (a bat hitting a baseball) leads to effect B (the baseball sails through the air). Logically, the cause must precede the effect. If it doesn’t, if Nature says “Gesundheit” before it sneezes, ordinary time breaks down, all the more if interactions are like a snake biting its tail, with causes and effects affecting one another in circular fashion. That’s the essence of acausality, or the absence of a cause. It is intertwined with nonlocality but focuses on time rather than distance and has enough fascinating aspects that it deserves its own post.

What does this mean for you? It means that parts of the matter in your body and parts of the matter you interact with (from baseballs and kitty cats to the food you eat) behave in ways that violate the classical understanding of locality and causality. At the quantum level, ordinary objects behave in ways that appear to be outside of what we normally think of as the laws of space and time. While we do not get to observe these small pieces of matter in everyday life, they are still there operating behind the scenes.

Even though you think you see yourself in a mirror, you are actually seeing one state of your physical body. That one state, accessible through the five senses, isn’t the whole. The whole also includes the quantum state of the particles that make up your body. The same holds true for the entire cosmos and reality itself. Science has gotten to the point where both states are understood in detail, yet there is as yet an unbridged division between them. It would be a huge advance to unite the local and the nonlocal, the causal and the acausal. That will be the aim of our next post.

Jennifer Nielsen is a PhD student studying physics and quantum information at the University of Kansas and is adjunct professor of mathematics at Haskell Indian Nations University. She is the recipient of a Foundational Questions Institute (FQXI) award for her paper “Is Bit It?” and is a recipient of the Chambliss Award for Research in Astrophysics.